Welcome back to the Stop Stalling series! Today, we’re going to take a look at some specific foods that may be causing your stall. These foods may be keeping you from getting ahead. The bad news is that a lot of them may be staples for you. Many of them seem keto-friendly: they’re low in net carbs and should be “safe.” In fact, they are “safe” for plenty of people. However, for some people, certain foods can cause stalls. If you’re in ketosis but not losing weight and have implemented everything advised in Volume 1: Operator Error, here’s a list of the most likely suspects. 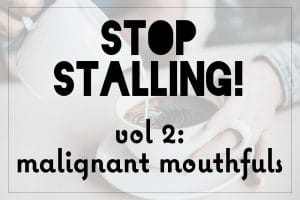 Dairy is a tricky one. First of all, it’s very energy-dense (i.e. it has a lot of calories). That means that it can be really easy to overdo. Alas, keto isn’t magical, and calories still count. Secondly, it’s often a carbohydrate bomb. A glass of milk has about ten grams. It can have more or less depending on the fat content. It can be tough to tell with yogurt: while the actual carb count is probably lower than what is listed on the label (fermentation consumes some of the carbohydrates), you can’t always tell just how many there are. This is even ignoring the fact that many yogurts contain additives, including starch-based thickeners. Finally, dairy is especially prone to “rounding down”: even though many labels say that a serving of cheese contains zero carbohydrates, chances are that a serving contains as many as 0.7 grams.

It seems like very little, but if you eat two servings (easy to do!), it’s going to add up over time. Many people rely on dairy, and when they drop it, they start losing again.

Seeds and nuts are horrible bastards. I love nuts, especially almonds. Especially the smoked ones or the spicy ones. And nut butter? Don’t get me started. I can eat half a jar of it in one sitting. I HAVE eaten half a jar (and then some) in one sitting. Do you see where I’m going with this? If not, here’s the spoiler: I can’t keep nut butter in the house because it’s a trigger food for me. I can only buy seeds and nuts in single-serve packages, and even then it’s not advisable. Seeds and nuts are good sources of protein and fat, but they also contain carbohydrates, many of which are sugar and starch and therefore anti-ketogenic. They contain a surprising amount of carbohydrates, actually. Even macademias, which are the most keto-friendly of the bunch, contain about 3 grams in a 2-oz. serving. This wouldn’t be a problem, except that it’s really easy to overeat them. A serving is way less than you think, so all of a sudden, your snack just blew your carb count for the day. Many people find that their stalls go away when they stop eating nuts.

This one’s sad. Very sad, because sugar-free candies seem like such a great way to deal with cravings. You want a Forbidden Treat? If you can find a sugar-free version, no problem, right? Alas, that is very, very wrong. Maltitol is a sugar alcohol, so it does have zero net carbs. However, its glycemic index is 52 for syrup and 36 for powdered. It will cause an insulin response, and it will impact blood glucose. (About half of the calories in maltitol can be absorbed.) Cut the grams of maltitol in your food in half and pretend that it’s table sugar, and you’ll have a pretty good idea of why maltitol is not at all good for people trying to maintain ketosis.

If that’s not enough of a deterrent, consider that maltitol has a laxative effect. Yes, many babes will eat a couple of sugar-free candies when the train is a little bit late leaving the station. Sometimes, this works well. Sometimes, they wind up with a bullet train that leaves without making a last call. (That’s where we get “disaster pants” and why so many women don’t trust keto farts.) Shart roulette is an even crappier game than carb chicken.

People often ask, “Why do you hate BPC?” Well, I personally hate BPC because I think coffee tastes vile and is probably the devil’s beverage. (Just kidding. Sort of.) But that’s not what you mean. You’re wondering why Ketogasm and KBB discourage the use of BPC and fat bombs. This is where it gets more complicated. If you are using the ketogenic diet as part of a weight loss program, you should not be going out of your way to eat or drink more calories, whether they are carb-y or not. It is NOT necessary to maintain a ketogenic ratio* for weight loss, and doing so could be a bit part of why you’re stalling.

Remember the motto “Carbs are a limit, protein is a goal, fat is a lever”? That’s what we mean: you should definitely not go above your carbs, you should definitely try to hit your protein, but you absolutely do not need to hit your fat macro. Making it a goal is going to hurt your progress. If you are stalling, try to cut back on your fat a bit. Don’t go below 50 or 60 grams a day of ingested fat (you need dietary fat to absorb certain nutrients, avoid feeling like crap, and maintain skin and hair health), but unless you’re hungry or having trouble focusing, there’s no need to ingest extra fat: your body will “eat” from its stores.

*A ketogenic ratio is used for people who are treating neurological conditions like epilepsy with a ketogenic diet. In this case, a certain ratio of macronutrients is necessary to prevent seizures. In this case, people must make sure that they eat enough fat to supply their ketones. This type of therapeutic diet is not used for weight loss; it is used to suppress symptoms of an illness. Even if you have more ketones circulating while eating more fat, you will not be burning your own fat stores. This is also why we say no to exogenous ketones.

Drinking alcohol on the keto diet can indeed cause your weight to stall. Be sure to read the keto alcohol guide to understand exactly why this could be contributing to your lack of progress.

This one is bound to ruffle some feathers. Heck, I didn’t like to hear it. There are those of us who are tempted to eat non-keto foods in small amounts, hoping that if it fits our macros, it won’t throw us out of ketosis. There are those of us who can. There are those of us who can’t. There are those of us who can have some non-keto foods in small amounts but not others. Nevertheless, if you’ve been eating small amounts of non-keto foods and hoping that you’re still maintaining ketosis, well, you might want to stop. You see, there are several problems with doing this. Just as you’ve learned that not all calories are the same and that not all carbs are the same, you’ve hopefully learned that not all sources of sugar, starch, fiber, etc. are the same. This kind of sucks, because it makes things confusing. Let’s take sugar, for example. A teaspoon of table sugar might seem like it would affect you the same way that 4 g of sugar in a handful of raspberries would, but it doesn’t. It isn’t tempered with water and fiber the way raspberries are. The same is true for honey. While it may be paleo, it sure as hell isn’t keto.

The Ketogenic Diet goes beyond helping adherents maintain ketosis: it also helps reduce inflammation and maintain general health. Non-keto foods don’t help with that. They can also promote inflammation, which can indeed result in weight gain (or a lack of weight loss). Cutting inflammatory foods may be the key.
In the third and final installment of Stop Stalling, we’ll look at underlying medical conditions that could be causing you to struggle with weight loss. Keto on, babes!

Don’t forget to PIN it! 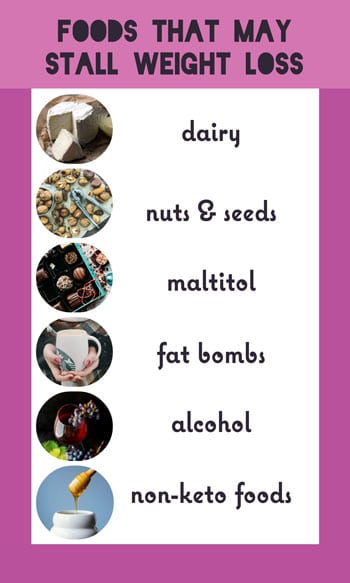 Julia is a teacher, tutor, and educational advisor who resides in Washington State, inconveniently close to Woodinville, where one finds many of the local wineries. She has a deep and abiding love for cats, cheese, spicy food, and pickled things. She someday hopes to take over the world, but in the meantime, is looking into public health. You can follow her on Twitter and Instagram @SWFgoesketo, where she often posts pictures of food and the gym.