If you’re searching for the best keto chili recipe, look no further! We have the perfect no bean chili that’s low carb and easy as can be. This homemade chili recipe without beans can be adapted to suit your tastes or preferred cooking vessel. Whip it up on the stove top, in your slow cooker, or pressure cooker. Whatever floats your boat!

If you’re wondering why a special keto diet chili recipe may be necessary, let’s take a look at the basics.

How many carbs are in a bowl of chili?

Good question! In just one cup of traditional canned chili with beans, there are 33.89g of total carbs. Naturally, this will vary by brand and actual serving size. However, the carbs in a bowl of chili are generally a bit on the high end for someone doing the standard keto diet due to the beans.

Any food can be “keto” if you take small enough bites or slice it thin enough, but there’s no denying that some foods are naturally more compatible with low carb diets. So it’s not necessarily that “beans aren’t keto,” but beans do have a relatively higher carbohydrate content. Now, are kidney beans keto? Same story.

Nutritional ketosis is induced by carbohydrate restriction, so you’ll get a lot more bang for your buck nutrition-wise by choosing ingredients that are low in carbs rather than nibbling tiny morsels of higher-carb ingredients. In other words, a few beans here and there won’t impact ketosis, but cupfuls likely will. If you’re doing traditional keto, don’t worry about a couple beans that pop up in a salad. But also, don’t plan recipes where beans are the primary ingredient. Find a suitable substitute or simply omit the high carb stuff—like making your keto chili without beans!

Of course, if you’re doing a style of keto that involves strategic intake of carbohydrates—such as carb cycling, cyclical ketogenic diet (CKD), or targeted ketogenic diet (TKD)—then beans can certainly fit into your dietary pattern. The most sustainable diets are the ones you can stick with, so feel free to customize and adjust your intake as you see fit! Customize keto to work for YOU, your diet doesn’t have to look like everyone else’s.

What is a good substitution for beans in chili?

A good substitution for beans in chili includes harder, non-starchy vegetables that soften up as the chili cooks to simulate the texture of cooked chili beans. Pieces of cauliflower, chayote, radishes, celery, or turnips would all be fantastic swaps in a keto chili! Keto chili with cauliflower is one of my personal favorites. Try adding cauliflower florets to the pot or serve the low carb chili over cauliflower rice. Delish!

Another alternative to consider is soybeans. These legumes have a substantially lower carbohydrate count than the traditional kidney bean and are very high in fiber. For example, in a half cup of canned black soybeans, total carbs are 8g, and fiber is 7g—a net carb count of just 1g! This certainly isn’t a bad option if you include soy in your diet.

Carbs in Chili – No Bean Chili

As written, a serving (~1 cup) of this keto chili recipe has just 5g net carbs and a total carb count of 7.4g. In fact, the entire recipe—the WHOLE pot of chili—has approximately 44g total carbs and 30g net. Not too shabby! That’s around the carb load of what you’d be getting in only a cup of canned chili with beans. When it comes to keto chili, homemade definitely wins.

Making homemade chili is foolproof. If you can brown meat, you can make chili. Simple as that! We are using ground beef and bacon (yum!) for the meat base, while onion, tomato paste, chili powder, cumin, smoked paprika, garlic, Rotel diced tomatoes, and beef broth meld together to deliver that signature chili flavor.

Keto chili with Rotel is the bee’s knees. You can’t go wrong with any of the flavors—original, hot, mild, chipotle, Mexican style—follow your heart (or your taste buds!). If you don’t have a can of Rotel diced tomatoes in your pantry or readily available at your grocery store, no worries. Feel free to swap it out for fresh or canned diced tomatoes.

How to Store Keto Chili

If you enjoy batch cooking, meal prep, or make-ahead meals, then you probably want to know how to store your keto chili. Also good to know for leftovers! Stored properly in an airtight container, your batch of chili will last up to one week in the refrigerator. Honestly, it tastes just as good a week later out of Tupperware as it does hot off the stove. Whenever I make this, I like to double the recipe to have enough for a family dinner, lunches for the week, and no one complains. It’s that delicious!

You can also freeze the chili to reheat at a later time. Let the chili cool down entirely and transfer to a freezer-safe storage container. Pull it from the freezer and pop it into the fridge to thaw overnight or the morning you plan to reheat. Reheating can be a job for the microwave (3-4 minutes), stovetop (medium-high 4-5 minutes), or oven (400F 10 to 15 minutes) depending on your storage container.

For Keto Chili on the Stovetop

Dutch Oven – Enameled cast iron is my jam. I love traditional cast iron, but acidic ingredients like tomato are no-go. An enameled cast iron dutch oven is one of my favorite things to cook my chili recipes in. And the clean up is a breeze! I have a couple fancy pants ones that I’ve received as gifts over the years, but there are budget-friendly varieties that work just as well!

Crockpot – If you prefer slow cooking over tending a pot on the stovetop, a crockpot can easily accommodate the low carb keto chili recipe. Chances are, you probably have one on hand… but if you’re just venturing into slow cooking, then this crockpot is a decent size and entry price-point to get started.

For keto crockpot chili, you’ll follow steps 1-4 of the recipes: cooking bacon, sauce, and browning the beef. Once you hit step 5 (that tasty addition of Rotel!), bounce over to your slow cooker to add all of the ingredients. Set your crockpot to cook the chili on low for 6 to 8 hours or on high for 4 to 6. If needed, pour in additional water if the keto slow cooker chili gets thicker than you like.

For Keto Chili in Instant Pot

Pressure Cooker – As written, the keto chili recipe is made on the stovetop. But you can easily tweak this for a pressure cooker, like the Instant Pot. I have had one of these electric pressure cookers since they first came out and they totally live up to the hype!

If you’re making the chili in an Instant Pot, simply use the sauté function to cook the bacon, sauce, and meat instead of a large pot. Once the beef has browned, toss in the remaining ingredients, seal, and cook at high pressure for about 15 minutes. You can use either a manual release or naturally let it release pressure. The keto chili will come out a tad bit more soupy since the pressure cooker traps the fluid inside instead of allowing it to escape and cook off. Enjoy it as-is or reduce the amount of beef broth in the recipe by one cup.

For Upping Your Meat Browning Game

Meat Chopper Thingy – As it’s very scientific name implies, this is a thingy that chops meat. It’s one of those weird kitchen gadgets that’s not totally necessary but turns out to be a total game-changer. Seriously. As it’s browning, you can quickly bread down meat into smaller chunks with this utensil, and it won’t damage your lovely pans. I legit rolled my eyes like an apathetic teenager when I read the Amazon review claiming “I don’t know how I managed without it”, but I get it now. Best 5 bucks I’ve ever spent.

Try one of our other keto chili recipes: 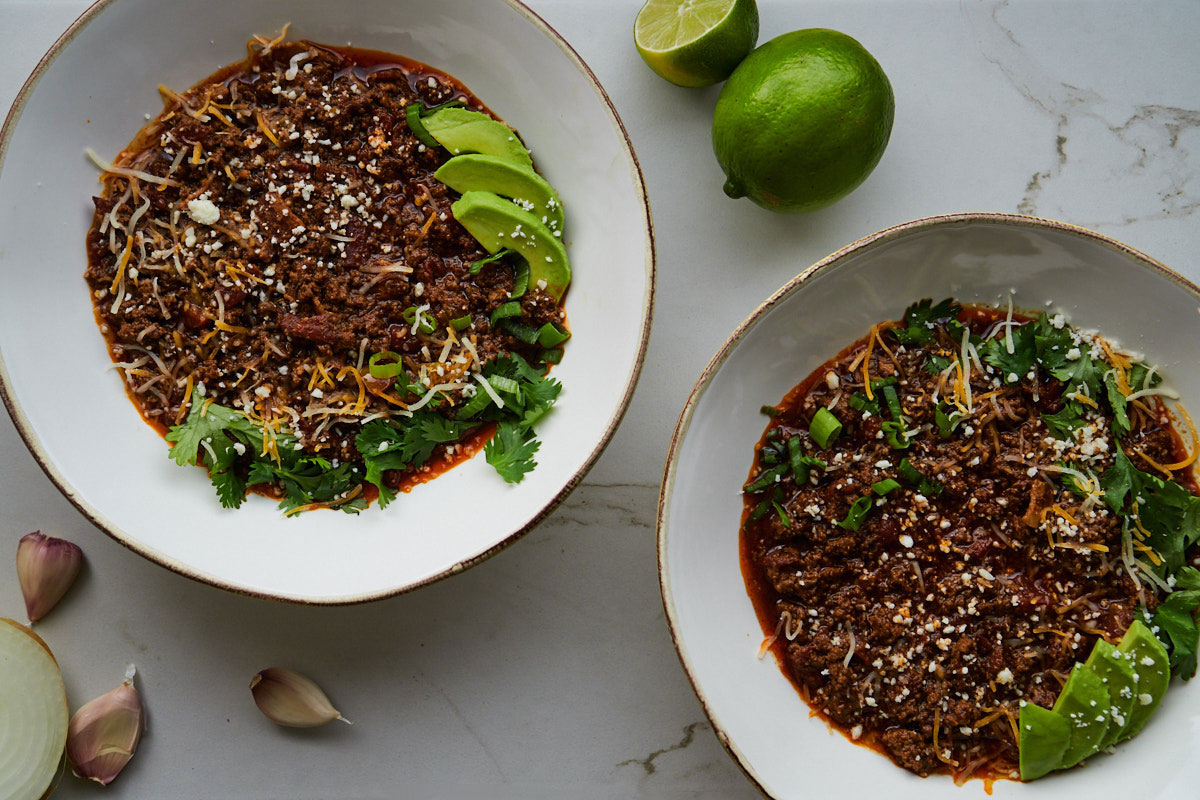 SERVING SIZE = ~1 cup of Keto Chili NET CARBS = 5.00g Nutrition information is based on a single serving and is provided as a convenience for Ketogasm readers. Data may vary based on brand and recipe variation. Click here for  more detailed nutrition information.