Love light, fluffy pancakes but hate all the carbs? Meet my keto pancakes recipe, your new best friend. These almond flour pancakes take breakfast to the next level: low carb, gluten-free, and over-the-top tasty. I rarely make the claim that any one recipe is the best… but these actually are the best keto pancakes I’ve ever tried.

They remind me of my favorite sweet cream pancakes I loved so much before I quit carbs and gluten for good.

In fact, I was trying to replicate the flavors of the infamous pancakes from Black Bear Diner when I developed the recipe. If you’ve ever had the pleasure, you’ll be happy to hear: I freaking nailed it. But the texture is much lighter and fluffier!

Why are these the best keto pancakes on the internet?

Allow me to explain! I’ve tried many a pancake in my day; I grew up in my family’s little diner on the oh-so-gritty South Tacoma Way. It’s where I learned to hold my own in the kitchen, wash dishes like a boss, and flirt for tips. Oh, and we just so happened to specialize in breakfast food. One might say I’m a bit of a breakfast connoisseur, but that sounds a bit pretentious doesn’t it? Let’s just say, I know a good pancake when I taste one, and this keto pancakes recipe is it.

Other keto pancakes recipes I’ve tried from various sources never quite did it for me. They either tasted like cream cheese or were just a little… off. There’s no cream cheese, no protein powder, and no real “cheats” to this one. It’s a good old-fashioned pancake without the carbs and grains. You guys are going to love it. 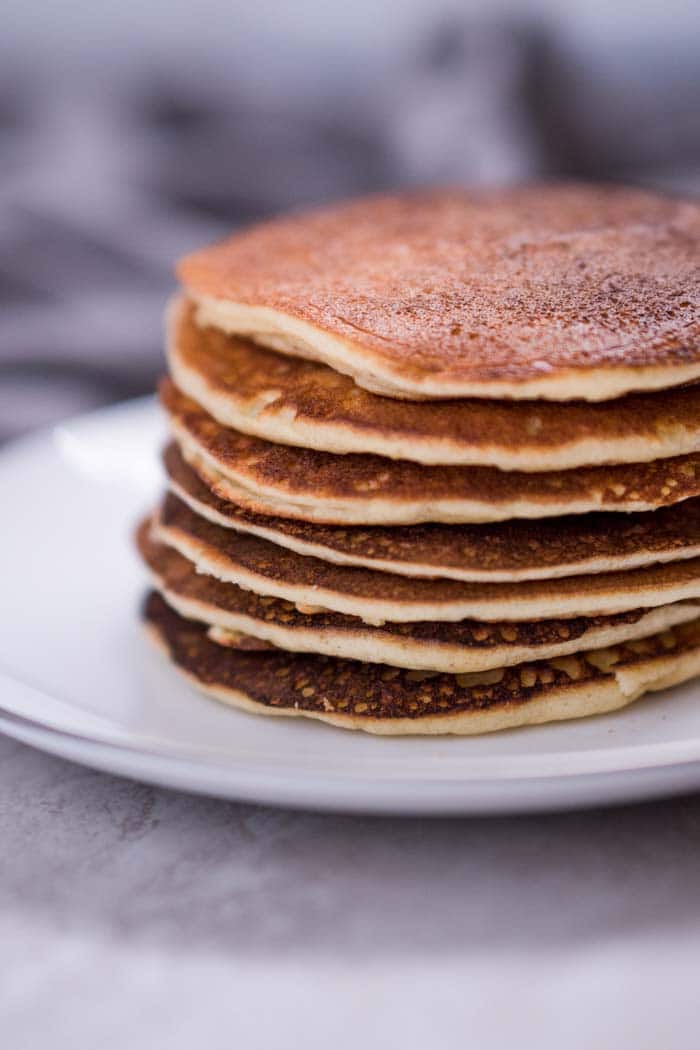 What makes pancakes light and fluffy?

The trick to making these keto pancakes so light and fluffy is egg whites! You’ll start by separating the eggs; the yolks will be mixed with the dry ingredients, the whites will be beaten to soft peaks in their own bowl. The egg whites are slowly incorporated into the pancake batter by folding the ingredients together with a spatula.

You’ll notice that the batter doesn’t look like your typical thick pancake batter. It’s airy and light, just like the beaten egg whites. This is the secret to fluffy pancakes! 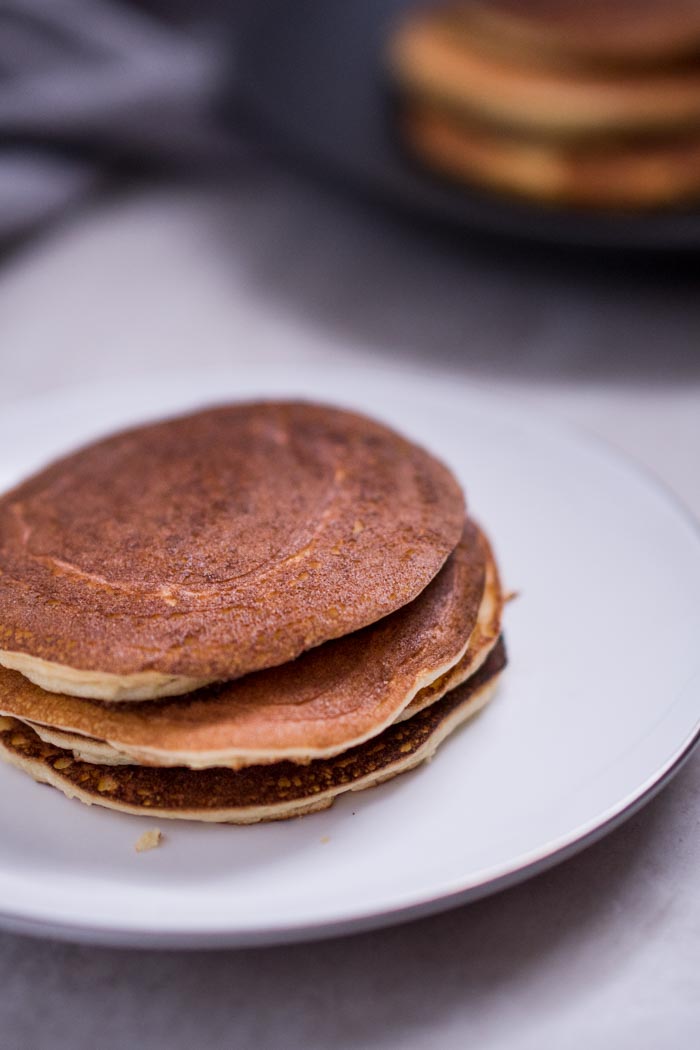 To keep the carbs low and gluten out, we are using almond flour. Almond flour is a great substitute for white flour. Thanks to the popularity of gluten-free and low carb diets, it can be found pretty much everywhere.

Gone are the days of tediously grinding your own almonds down to a fine powder; just head to the grocery store. It’s almost guaranteed to be on the shelf in the baking section. If it’s not, you can always pick some up off of Amazon.

I prefer to use the super fine almond flour instead of almond meal. The superfine flour has the perfect texture for a flour replacement while the meal tends to be gritty and grainy. You can get away with interchanging them in some things like fathead pizza dough, but not in this keto pancakes recipe. To keep things light and fluffy, splurge on the super fine stuff to make these almond flour pancakes really shine. 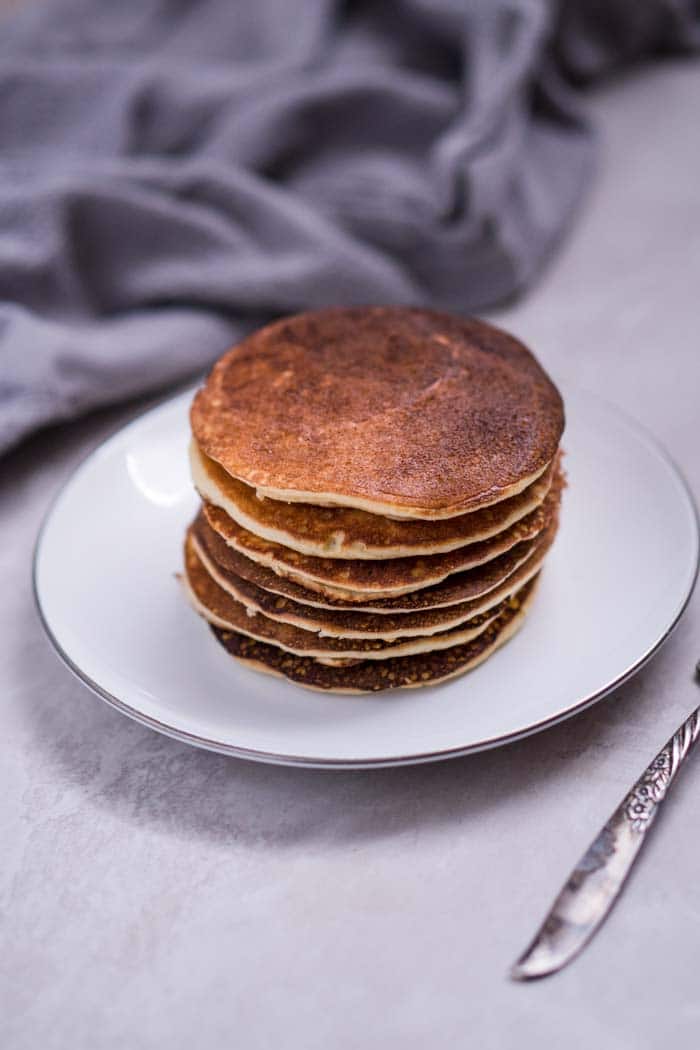 It’s true you can make fast work of a pancake with just a couple eggs and protein powder. Honestly, I do that… a lot. But I wanted to create something homey and nostalgic; a pancake that didn’t make you feel like you were on a diet. 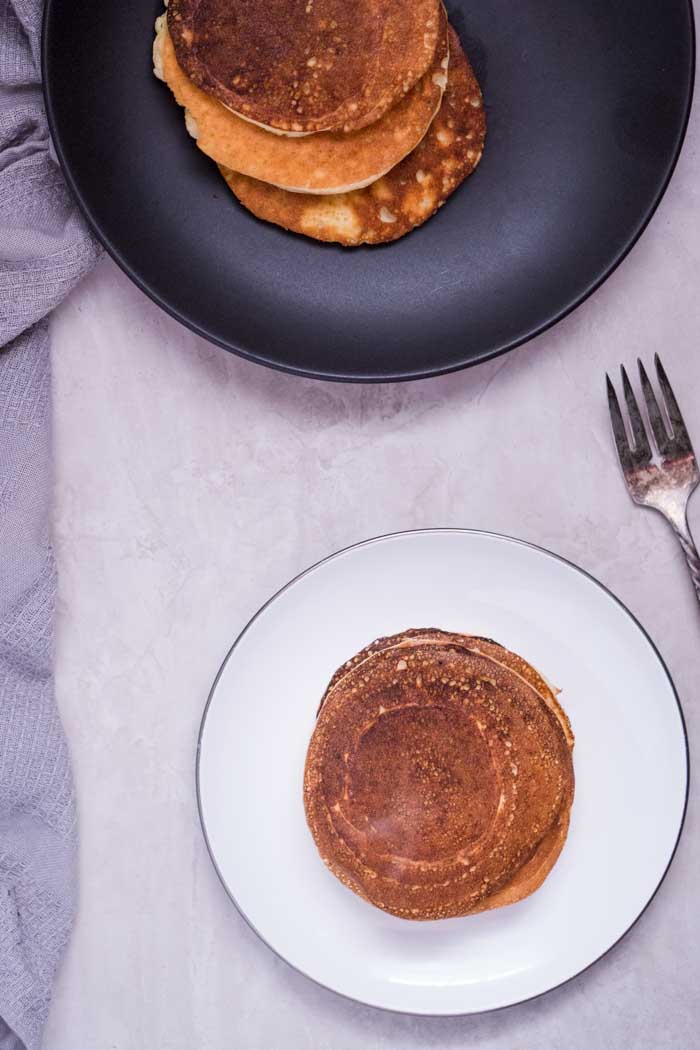 If you’re looking for protein-packed pancakes, try one of these recipes:

I really hope you love this keto pancakes recipe as much as I do! Let me know in the comments below! 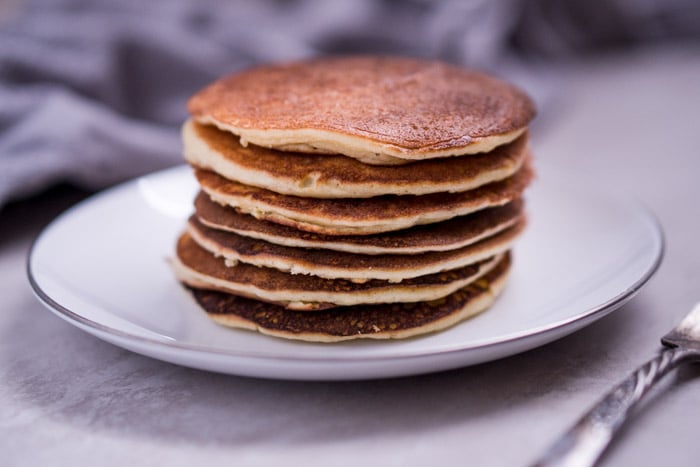 Total recipe yields 8 small pancakes. Nutrition information provided is for 1 serving; 1 serving = 4 pancakes as prepared per recipe instructions. 4g net carbs per serving.  For those who have requested volumetric measurement of the almond flour, 2 ounces of the ingredient is approximately 1/2 cup.