I made this low carb pumpkin pancakes recipe after a trip to the pumpkin patch with the kiddos. This happened a while back, well before Halloween. As we’re quickly approaching Turkey Day, I figured I’d better hurry up and share it before the pumpkin spice craze subsides until next year; it always resurges.

After stomping through the pumpkin patch and hauling a wheelbarrow full of squashes home, you’d think I would have used fresh pumpkin for the low carb pumpkin pancakes. But you’d be wrong, I still cheated and used pumpkin puree straight from the can. I did, however, roast all of our pumpkin seeds… so it’s a wash, right?

Pumpkin is pretty low in carbohydrates. As long as it’s not mixed up with a bunch of sugary stuff, you’ll probably be just fine indulging in The Pumpkin when Fall rolls around. In 100 grams of raw pumpkin, there are 6 grams of net carbohydrates.

But let’s be real, most of us use canned pumpkin puree. You don’t have to lie to kick it. In 100 grams of the canned stuff, there are only 5 grams of net carbohydrates, according to the USDA database. Not sure of the reason for the discrepancy myself, I’ve got no clue what goes on at the pumpkin processing plant, but the numbers seem to check out with different brands and sources. Lower carb is lower carb, even if it’s only by one gram; if you were feeling bad about using canned pumpkin for some reason, you can go ahead and stop now. 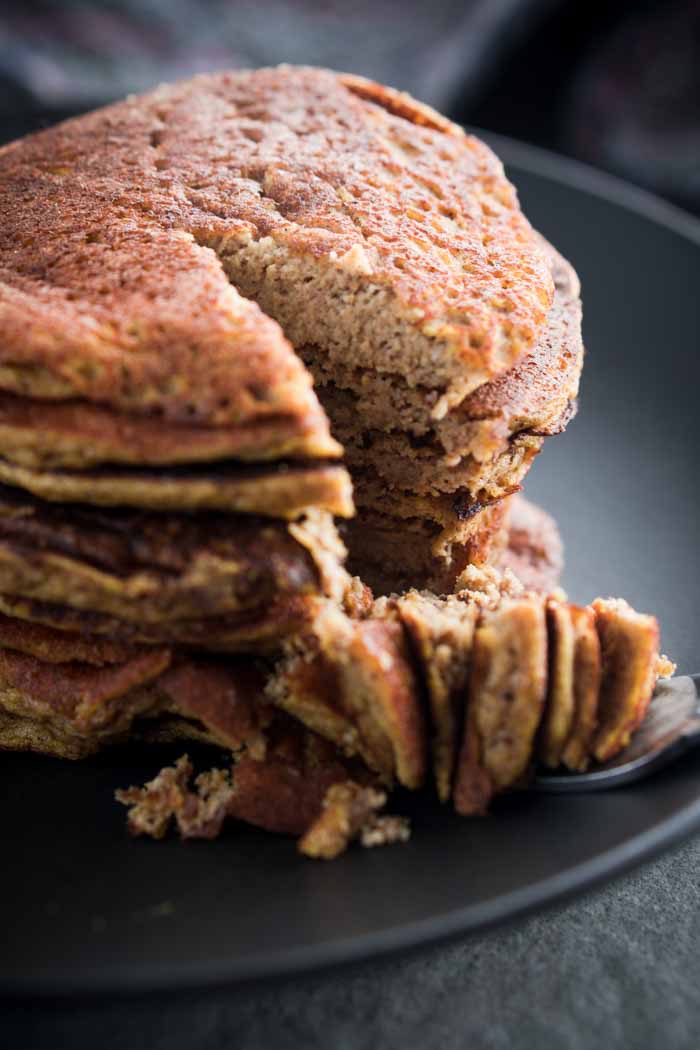 The low carb pumpkin pancakes are based on my keto pancakes recipe, but with loads of Autumn flavor. Pumpkin puree and the classic pumpkin pie spices (or as I like to call it, the basic bitch spice mix ?) give the pancakes a beautiful, deep color and all the flavors you’re missing from your beloved PSL.

Mix egg yolks, whipping cream, pumpkin puree, your favorite low carb sweetener, nutmeg, cinnamon, ground ginger, allspice, and a pinch of salt. Whisk in almond flour and baking powder. If you were hoping this was a dairy-free recipe, try subbing in almond milk or coconut milk instead of whipping cream!

Beat egg whites in a separate bowl until you get soft peaks, then gently fold them into the pumpkin mixture. The egg whites help keep the pancakes light and fluffy, so take care not to overmix or the batter will deflate a bit.

Spoon batter into a greased skillet and cook 2-3 minutes on each side. Simple, delicious, fluffy fall-inspired pancakes! Enjoy your low carb pumpkin pancakes with a keto friendly sugar-free syrup or, my personal favorite, butter.

Look no further, my friend:

If you LOVE the low carb pumpkin pancakes recipe, be sure to leave a rating and comment below! <3 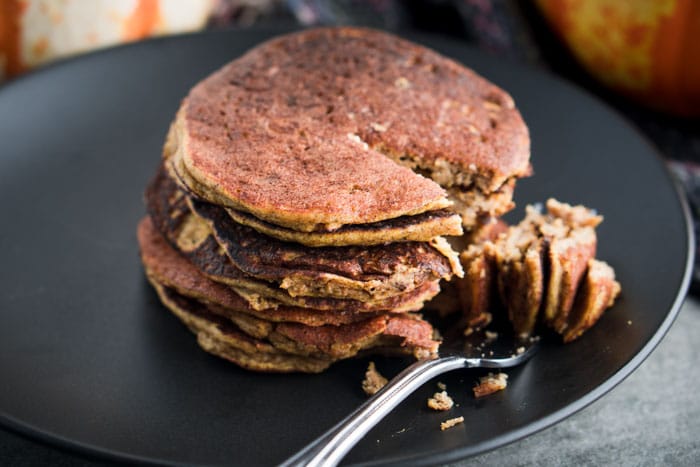