Have a craving for keto stuffed peppers? You’re in luck! This keto poblano pepper recipe is just what the doctor ordered. Stuffed with flavorful pork or beef seasoned to perfection, the roasted poblanos add just the right amount of spiciness. 🔥If you prefer a more mellow stuffed pepper, this recipe works great for bell peppers as well!

Whether you’re on the hunt for new keto recipes or just learning how to do the keto diet, you may be trying to figure out what type of foods work best. The main factor when looking at which foods will support ketosis is carbohydrate count, not necessarily fats (contrary to popular belief).

Carb restriction drives ketosis, so choosing low carb ingredients is essential for a keto stuffed peppers recipe. You can use poblano peppers or bell peppers to stuff, based on your preference or what you have on hand. The stuffing is versatile and can be adjusted to taste as well. Various cooked meats, chopped vegetables, eggs, and cheese would all work great in keto stuffed peppers.

We’ve used ground pork or beef, but shredded or chopped chicken would be wonderful as well. Scrambling eggs in place of meat or simply cracking an egg into a pepper would make a great vegetarian option. Diced mushrooms are put to good use in this keto stuffed peppers recipe, but riced cauliflower, shredded zucchini, cooked turnips, or eggplant would be excellent swaps. Use our recipe for inspiration and feel free to go wild and get creative!

“Keto-friendly” just means that something is low enough in carbs that a reasonable serving size would still be conducive to ketosis. To reach and stay in ketosis, most people have a carb tolerance at or below 50 grams of daily carbs (~25g net). That means poblano peppers can definitely be keto-friendly.

At only 4.64g total carbs per 100g, poblano peppers definitely fit the low carb bill. There are 1.7g of fiber in this same amount, giving poblano pepper net carbs of 2.94g.

Again, bell peppers are low in carbs and therefore keto-friendly.

How to Make Keto Stuffed Peppers

First, you will want to roast the peppers. This is optional if you choose to use bell peppers, but a good idea if you are using poblano. Roasting allows you to remove the tough outer skin easily.

A quick and easy way to roast the peppers is broiling on high for about 6 to 8 minutes, flipping the peppers at the halfway point. Pop the peppers in a zipper-lock bag until cool to the touch, the easily peel the skin away and discard. Cut a slit in the poblano and carefully remove the seeds or chop the bell pepper in half and do the same.

Brown the pork or ground beef for the keto stuffed peppers, discard grease, then mix in the seasoning. We use tomato paste, cumin, chili powder, onion, and salt mixed with water. Bring this all to a boil, then let the meat absorb the flavoring while the excess water cooks off.

Mix in your mushrooms or veggies of choice, then stuff the peppers and place on a baking dish. Pop the keto stuffed peppers in the oven for 10 to 15 minutes and garnish with crema, cotija, or cilantro to serve.

How to Store Keto Stuffed Peppers

If you have leftover low carb stuffed peppers, you will want to place them in an airtight container and refrigerate for up to 7 days.

If you are making the keto stuffed peppers ahead of time to freeze, place in a freezer-safe bag or container instead of baking them after they are filled with stuffing for best results. Don’t add crema, sour cream, or cheese toppings before freezing.

Instead, freeze the keto stuffed peppers and thaw in the refrigerator the day of baking or evening prior. Bake for 10 to 15 minutes in the oven at 400 degrees F and garnish as desired once you are ready to serve. Stuffed peppers can feel a bit labor-intensive on a busy night, so it’s definitely nice to have the freezer meal option! 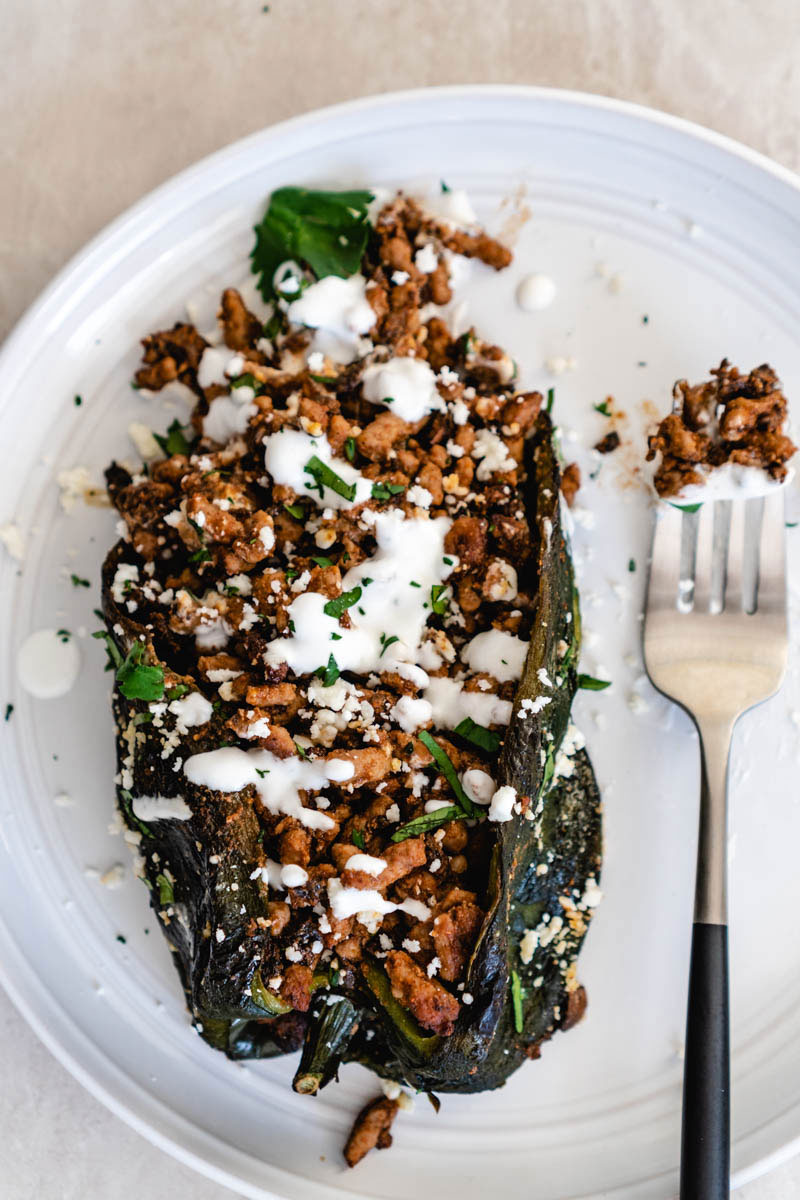 Note: If using bell peppers, you can skip steps 1-4. Broiling and peeling bell peppers are optional! Instead, cut the bell pepper in half lengthwise in lieu of slit and proceed to step 5.   Serving Size = 1 stuffed Pepper   NET CARBS = 3.46g Nutrition information is based on a single serving and is provided as a convenience for Ketogasm readers. Data may vary based on brand and recipe variation. Click here for more detailed nutrition information.