Stop Stalling! AKA, Why Am I Stalling on Keto and How Do I Stop It? 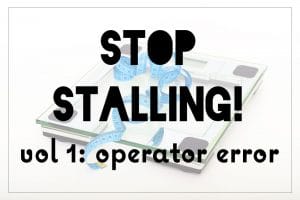 Stalling on keto? First of all, let’s be realistic: failure to lose half your body weight overnight is not a stall.

In short, if it’s been less than six to eight weeks, and/or your measurements are going down, it’s not a stall, and you’ve got to stop worrying.

Now, if you haven’t seen any changes on the scale or tape measure for several weeks, you’re stalled, and, unfortunately, it’s probably because you’re doing something wrong. There are two primary suspects for stalls: carbs and calories.

Huge Mistake #1: Not keeping track of carbs and calories.

Now, I can already hear you insist that you’re tracking EVERYTHING and you’re DEFINITELY under 20 grams of net carbs. To that I say: “Are you sure?” Babes who play chicken with carbs often lose, and here’s why: carbs are sneaky.

If you think you can game the system by buying the brand of HWC that lists 0 carbs instead of the one that lists 1 carb, you are shooting yourself in the foot. You see, heavy cream is heavy cream, and unless you see something added to it (such as a mysterious-sounding gum), it’s going to have the same carb count no matter what the brand is. The only difference is that some brands round up to 1 gram per serving and others round down to 0. All heavy cream is going to have 0.4 grams of carbohydrate per tablespoon. That adds up. There are also carbs in eggs: one large egg has 0.6 grams of carbohydrate. If you had coffee with 2 tablespoons of cream and 3 eggs for breakfast, you’re already at 10% of the carbohydrate grams you can have in a day if you’re sticking to 20 g of carbs.

It gets worse… foods that you may have considered “free” (and indeed are considered “free” in other ways of eating) can be veritable carb bombs. A tablespoon of cinnamon has 2.1 net carbs, so if you’re sprinkling it with abandon on your coffee, or, God help you, trying to do the cinnamon challenge*, it could be part of what is stalling you. Other sneaky sources of carbs include dairy (everything but ghee has a small amount of carbohydrate in it), cured meat, and condiments like hot sauce.

If you’ve been close to your 20 grams already, these not-actually-zero-carbohydrate foods could very well be putting you well over your limit. Don’t play chicken with carbs. 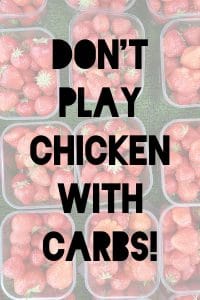 The way to fix it? Be honest about how many carbs you’re eating. Don’t rely on food labels… do you really think that all nutrients occur in nice round numbers? Of course they don’t. They aren’t kindergarten students. They’re nutrients. They probably involve decimals. Check the USDA web site for more accurate carb counts, and keep in mind that even it may not be perfect: a very ripe strawberry is going to have more sugar than is a slightly underripe strawberry. Still, it’s more precise than whatever is on the label.

Huge Mistake #2: Not using a kitchen scale to measure food.

Speaking of nice, round numbers, are you absolutely, totally sure that your calories are on point? If you’re not measuring your food, they’re not. If you’re measuring by volume or quantity, they’re not.

I know someone, a self-identified ice cream addict, who decided that the best way to keep his consumption in check was to limit himself to a single coffee mug-sized serving a day. Good plan, right? He even stuck to it. However, he stuck to the letter of his law rather than the spirit. He started microwaving the ice cream so it melted and he could fit more into the mug. This obviously defeated the purpose. Babes, if you are picking the biggest strawberries and thinking that you’re gaming the system, it’s time for a reality check: there are more calories (and carbs) in the strawberries that are the size of your fist than are in strawberries that are half that size, so stop pretending that there aren’t. If you’re shaking the measuring cup to get the almonds to settle so you can fit more in, you’re only fooling yourself.  If you’ve been eyeballing things, measuring by volume, or using any other sort of more subjective way of quantifying your intake, you may very well be taking in a lot more than you think.

If you’re not nodding sheepishly by now, then something else may be at work here. The good news is that you may not be sabotaging yourself through delusion. The bad news is that it’s quite possibly still carbs or calories. Quickest fix? Head to a solid keto calculator (Ketogains is fantastic) and recalculate your macros for your new weight. As your weight and body composition change, your caloric needs do as well. If, for instance, you are losing weight, you’ll need to eat fewer calories. If you are still eating for your old needs, you might be overdoing it. (What was once a deficit is now maintenance. If you want to lose more weight, you’re going to have to cut calories again. Them’s the breaks.) If it turns out that you need to reduce your calories, well, reduce your calories and see if that helps get things going again.

That wraps up the operator error portion of Stop Stalling! Check back soon for my next installment, Malignant Mouthfuls.

*Ketogasm and KBB are very much against the cinnamon challenge, as it is not healthy to ruin your lungs. Don’t be an idiot.

Julia is a teacher, tutor, and educational advisor who resides in Washington State, inconveniently close to Woodinville, where one finds many of the local wineries. She has a deep and abiding love for cats, cheese, spicy food, and pickled things. She someday hopes to take over the world, but in the meantime, is looking into public health. You can follow her on Twitter and Instagram @SWFgoesketo, where she often posts pictures of food and the gym.