With the holiday season upon us, one thing is sure: there will be pies everywhere. This keto apple pie filling delivers all of the flavors of apple pie without breaking your diet! It’s healthy, low in carbs, but tastes just like the real deal! Now you can indulge without feeling guilty.

You may know by now that apples aren’t very keto friendly. They are relatively high in sugar without much fiber; for 100 grams of apple, there are 11.41 grams of net carbohydrates. That means most keto dieters aren’t able to enjoy apples or any of the usual treats made with them. 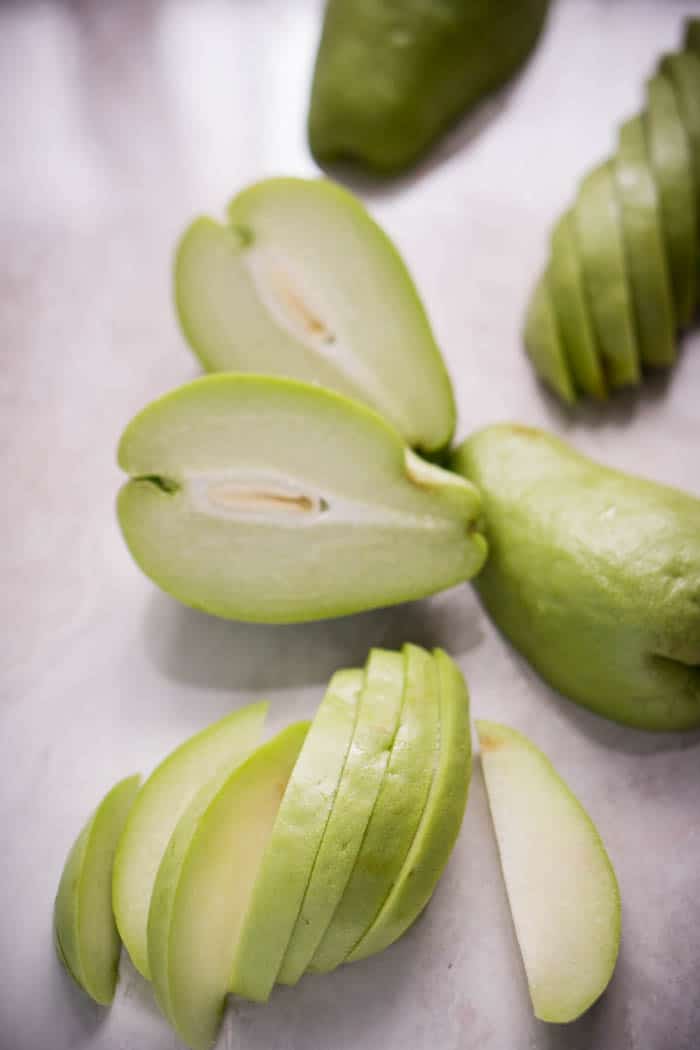 I’ve been obsessing over using chayote as an apple replacement lately. They are just so similar in texture and appearance! With a little finagling and keto kitchen magic, the taste isn’t far from an apple either. After tasting the chayote in my cinnamon pork chops & mock apples recipe for my keto meal prep, my partner literally begged me to make a pie with it. He’s not even a keto dieter, so that should give you some idea of how delicious it is! 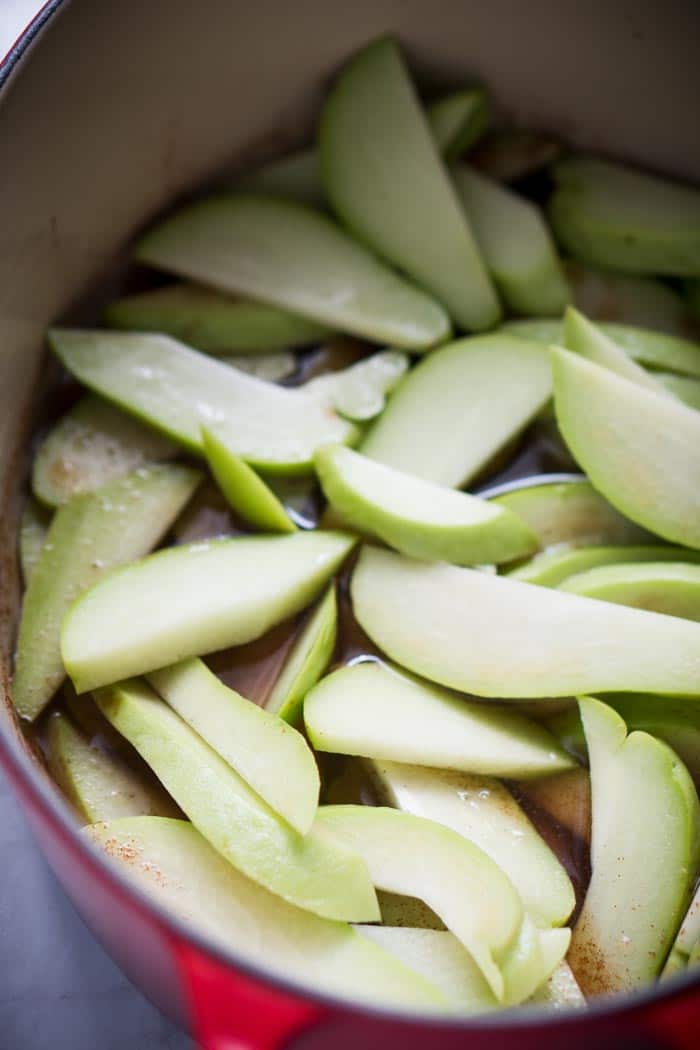 Did you ever do the mock apple pie experiment in chemistry class? Not an apple in sight, but that certain set of ingredients somehow came together to fool you into believing it was truly apple pie. The key component of the experiment is the cream of tartar; it brings in an acidity and taste of sourness that perfectly mimics that of an apple. Seriously. Google it if you don’t believe me, I’ll wait right here.

I’ll never forget that little trick, so when I set out to make a keto apple pie filling with chayote, I knew cream of tartar would be essential to replacing the tartness of the apple. You don’t need a chemistry set to pull this recipe off; it’s easy as pie! Sorry, I couldn’t help myself.

Mix water, low carb sweetener (I used Lakanto Monkfruit – my new fave!), cream of tartar, lemon juice, cinnamon, and nutmeg in a large stockpot. Add in sliced or chopped chayote and two tablespoons of ghee or butter. Crank your heat up to high to bring the mixture to a boil. Keep the mixture boiling over high heat for ten minutes, stirring occasionally. 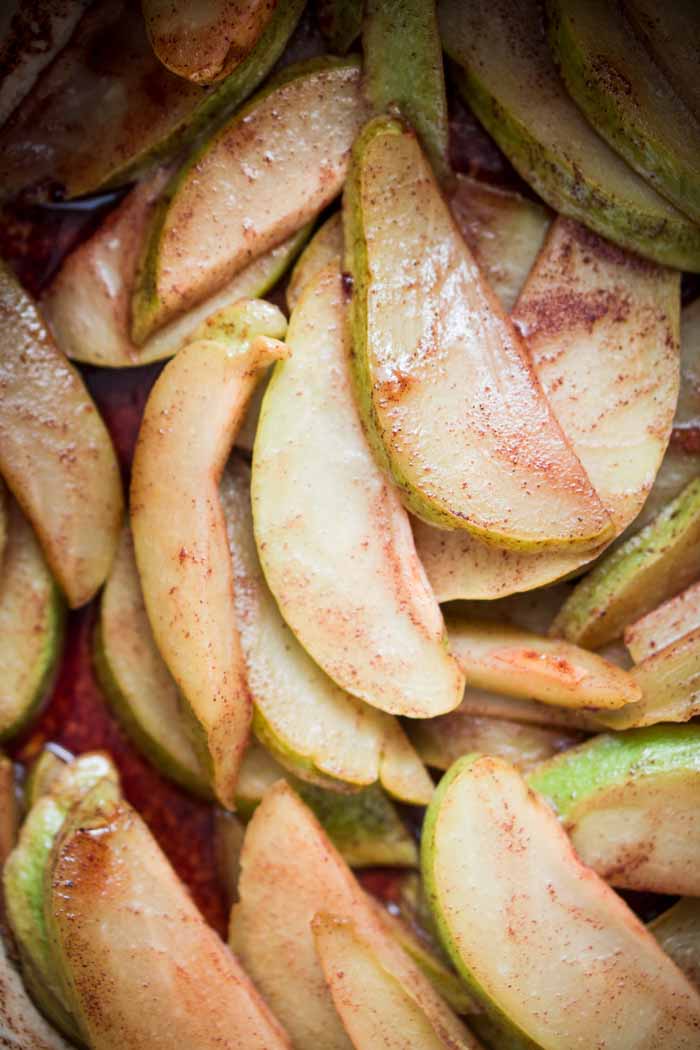 After ten minutes, the liquid will have mostly evaporated, and the mixture will be ready to use in an apple pie, apple cobbler, or any type of baking recipe that would typically call for an apple pie filling.

At this point, the chayote will be soft and tender, but not quite the texture to trick you into thinking it’s an apple. You’ll need to bake the mixture to soften it to the perfect consistency. It’s awesome because it doesn’t get watery like some other low carb vegetables when baked.

If you would prefer to dig right in instead of using it as a pie filling (guilty!), just pop it into a baking dish and bake for 350 degrees Fahrenheit for 30 to 40 minutes.

Enjoy your keto apple pie filling and let me know what you bake with it in the comments below! 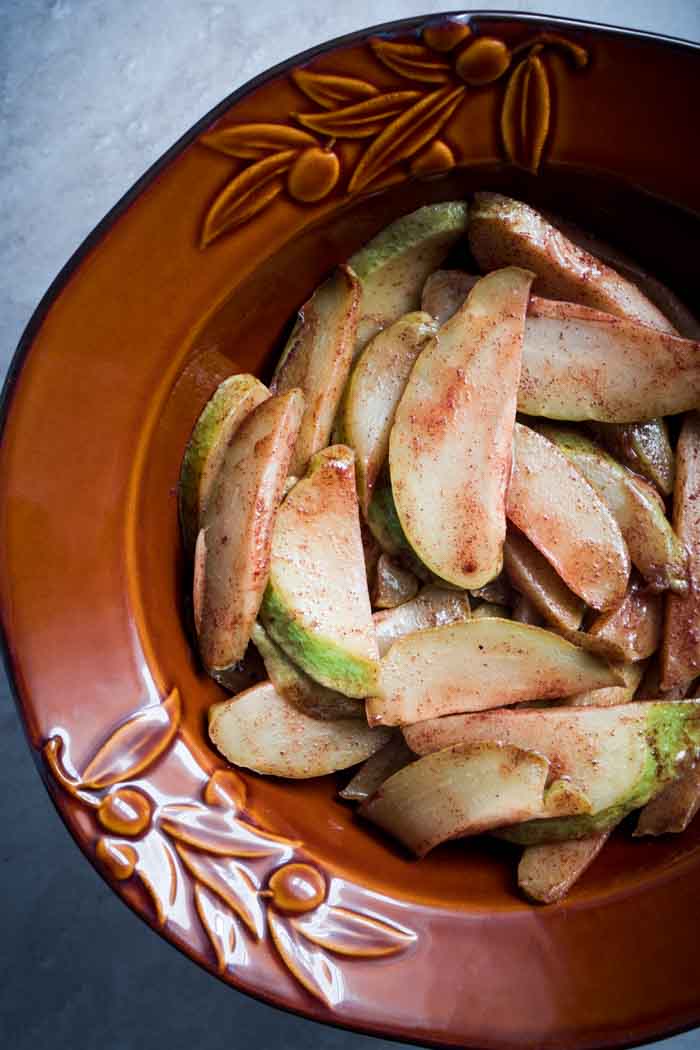 Looking for other keto chayote recipes? 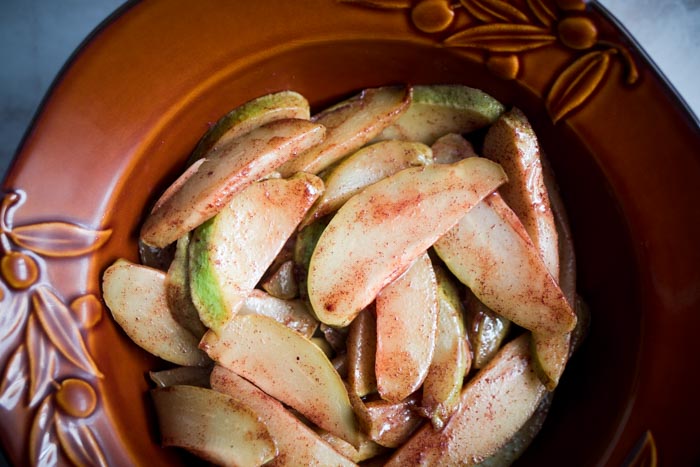