Do you miss breakfast burritos? Never fear, my low carb, keto breakfast burrito bowl recipe will satisfy the most sinister of Tex-Mex cravings. I’m a huge fan of leftovers and working with what I have on hand; this recipe was born from tossing a few taco night leftovers together with scrambled eggs. I’m not here to church it up, that’s exactly how it went down. And you know what, it was so delicious I decided to tweak a few things, test it out a handful of times, and turn it into a user-friendly recipe that’s a little more specific than “scramble eggs with taco fixings and eat.”

There are three separate components to this dish: taco meat, cilantro cauliflower rice, and scrambled eggs. Each part can stand on its own, but the trio came together in a way that surprised me. The flavors didn’t compete with each other; they perfectly complemented one another.

You can prepare each component separately as I initially did (and for photos), or you can take a one-pot approach the way I developed the recipe. I don’t like to do dishes; I assume you don’t either. Let’s keep it simple, right?

Separately, you’ll want to prepare the taco meat with keto taco seasoning, fry cauliflower rice with cilantro and salt, then scramble eggs with ghee. Layer or portion each component into a bowl, then mix it all as you eat it. 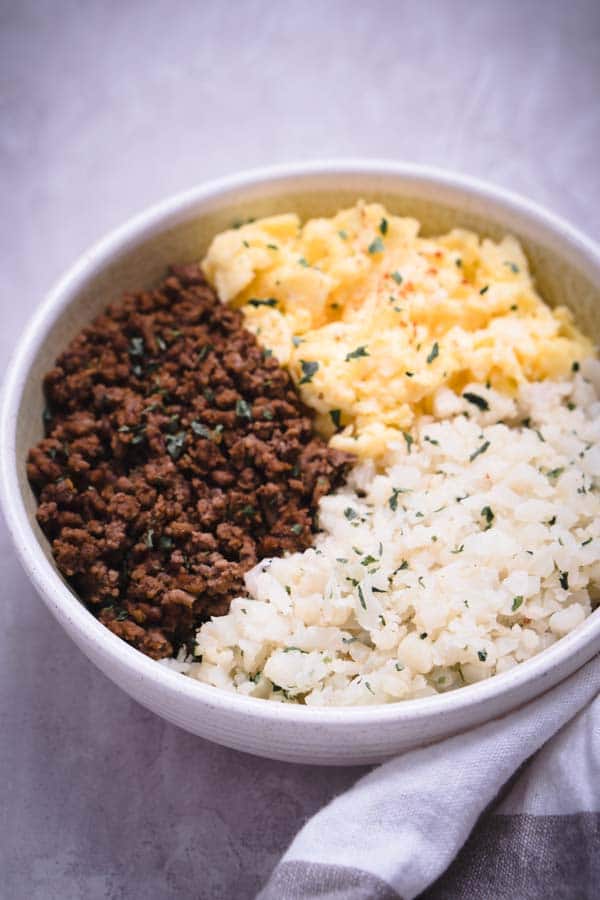 Don’t worry about what it looks like because you’re going to mix it all up eventually anyway. Start by browning ground beef in a large skillet. Remove any fat that renders as it cooks, then mix in your go-to low carb taco seasoning and a little bit of water. Bring it to a boil, reduce the heat and let it simmer for a few minutes.

Push the taco meat over to the side of the skillet and toss in the riced cauliflower, cilantro, and salt in the open space. Cook the cauliflower for several minutes, then push it to the side to make room for the scrambled egg. If you don’t have a large enough skillet, grab an additional pan to scramble your eggs. It can be tricky to do if you’re running out of room!

Melt ghee and pour in the beaten egg, whisking the egg and shaking the skillet as it cooks. Once the egg scrambles to your liking, mix it in with the rest of the dish. Garnish with cilantro, add some hot sauce if you like, and enjoy your keto breakfast burrito bowl! 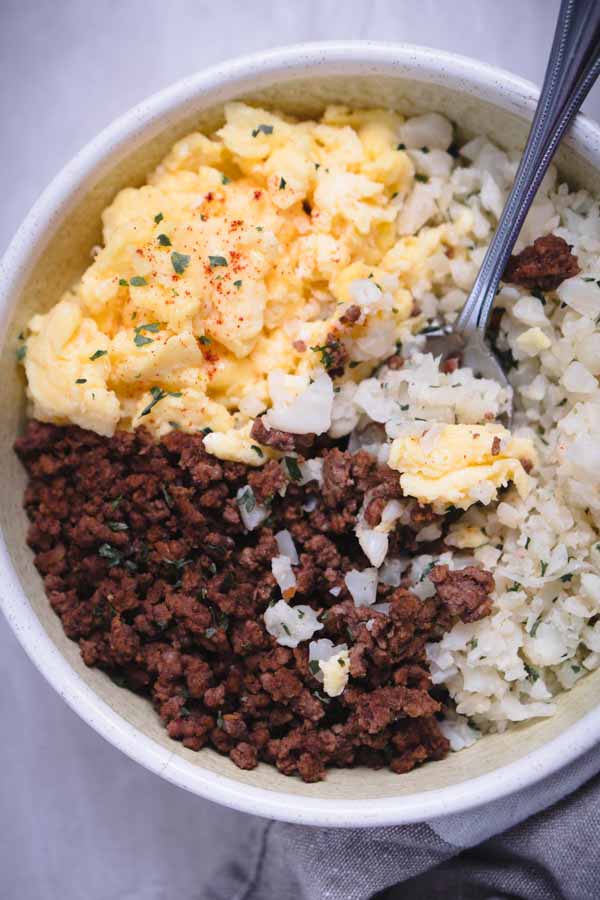