Chayote chicken noodle soup, aka one of the best soups I’ve ever made. The taste and texture are so spot on with traditional homemade chicken noodle soup; you won’t even miss your carb-loaded comfort food. Whether you’re simply craving a cozy, homey soup, need a quick family-friendly keto meal, or nursing a cold without carbs, this chicken soup with chayote noodles will definitely hit the spot!

Don’t forget to PIN it to make later!

Chayote is a small, green squash that you can find in many markets year round. Raw, the chayote is reminiscent of a green apple in appearance and texture, but it’s only slightly sweet and not at all sour. When cooked, the chayote soaks in the flavor of whatever it’s cooking in. It holds up really well to heat, maintaining some of its texture and bite, in a way very similar to celery.

In 100 grams of chayote, there are only 2.81 grams of net carbohydrates. This makes chayote a great low carb vegetable (or fruit) choice for a ketogenic diet. It’s low in carbs and calories, but it’s a surprisingly filling ingredient. Used as a noodle replacement, casseroles, or au gratin, chayote is a great way to reduce calories and carbohydrates in your diet. Chayote is also high in potassium and folate!

If you haven’t heard of chayote, don’t feel bad. It’s called something different in every part of the US and throughout the world. Maybe pear squash or mirliton is more familiar? Or cho-cho, chochoute, or choko? Either way, they’re all the same ingredient and can all be enjoyed on the keto diet. ? 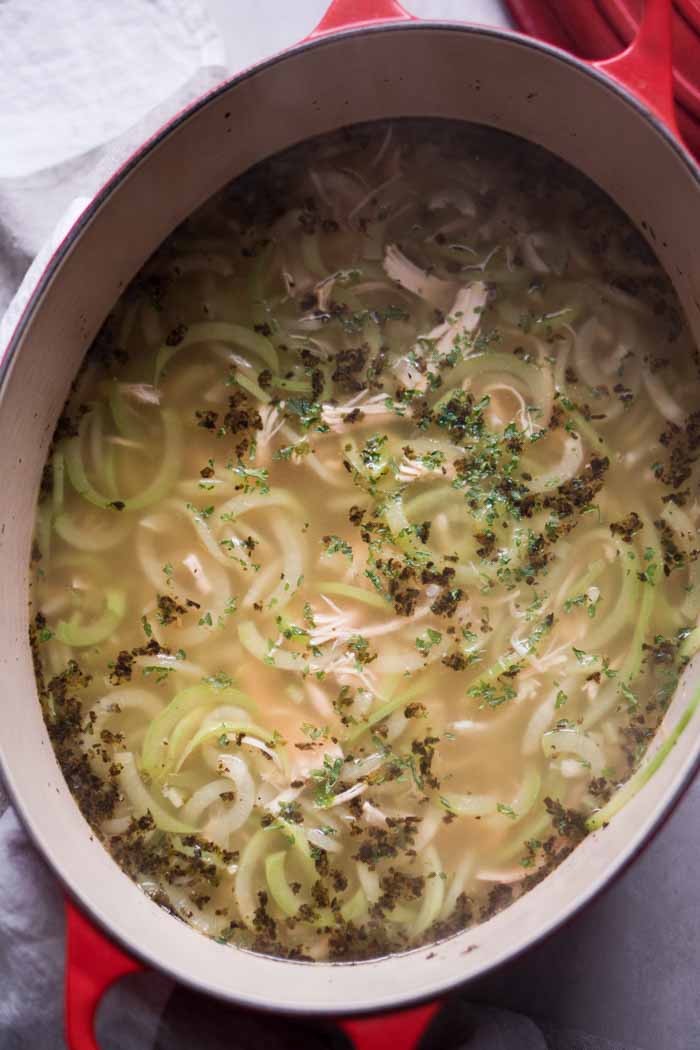 How do you make chayote noodles?

Chayote noodles are some of my favorite vegetable noodles, hands down. Because they hold up so well to heat, they don’t go limp and lifeless the same way other veggie noodles tend to do when cooked. If you’re not a fan of zucchini noodles, I implore you to give chayote a shot before you write off vegetables as a low carb noodle replacement.

To make chayote noodles, you need a large spiralizer tool. Something substantial that sits on the countertop will do the trick, while the handheld spiralizers aren’t typically wide enough to fit the fruit. I have The Inspiralizer and absolutely love it for all my veggie noodle needs, but it particularly comes in handy when tackling chayote noodles which are much too broad for the smaller gadgets. I even use it to shred my cabbage. That’s right, cabbage!

Simply place the chayote between the blade and the handle portions, then start cranking. It’s effortless, and each chayote is done in minutes. No peeling, no coring, it’s as simple as cranking a handle a few turns, and you’re noodles are ready. 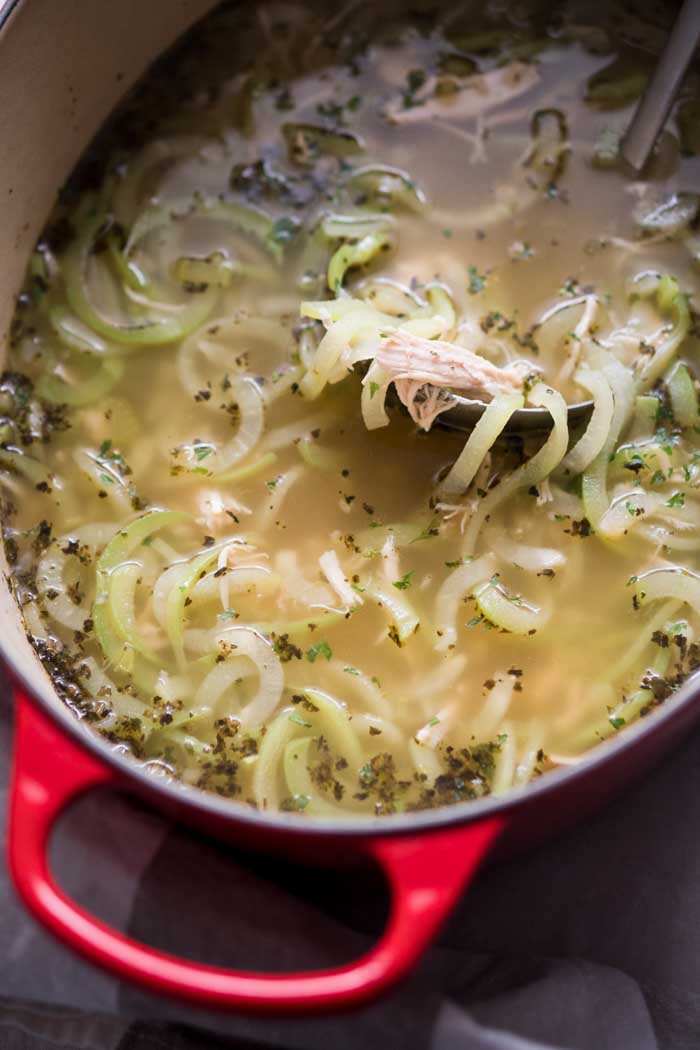 To start, melt ghee in a large stockpot and toss in diced onion. You can use butter if you allow dairy in your diet, but I have been using ghee in a lot of my recipes lately to give the paleo and dairy free crowd more keto options. Easy substitute if you don’t have it on hand!

Add chicken stock, water, pre-cooked chicken, basil, oregano, parsley, pepper, and salt. Depending on your chicken stock or broth used, the amount of salt and flavor will vary widely, so be sure to taste and adjust salt accordingly at the end. I like to make my own, but the organic chicken stock from Costco is really damn good. It tastes great, is zero carb and fat, plus there’s no added sugar. So that’s my go-to when I don’t have homemade on hand, in case you were wondering. It’s amazing! They have it here on Amazon if you don’t have a Costco membership.

Bring that all to a boil, then reduce to a simmer over low-medium heat and cover for 10 minutes. Toss in your chayote noodles at this point and allow them to simmer in the soup for ten more minutes without the lid, stirring every so often. Test your chayote noodles at this point; if they feel crisp still, give them some more time, but if they are nice and noodle-y, your low carb chicken noodle soup is ready to go! 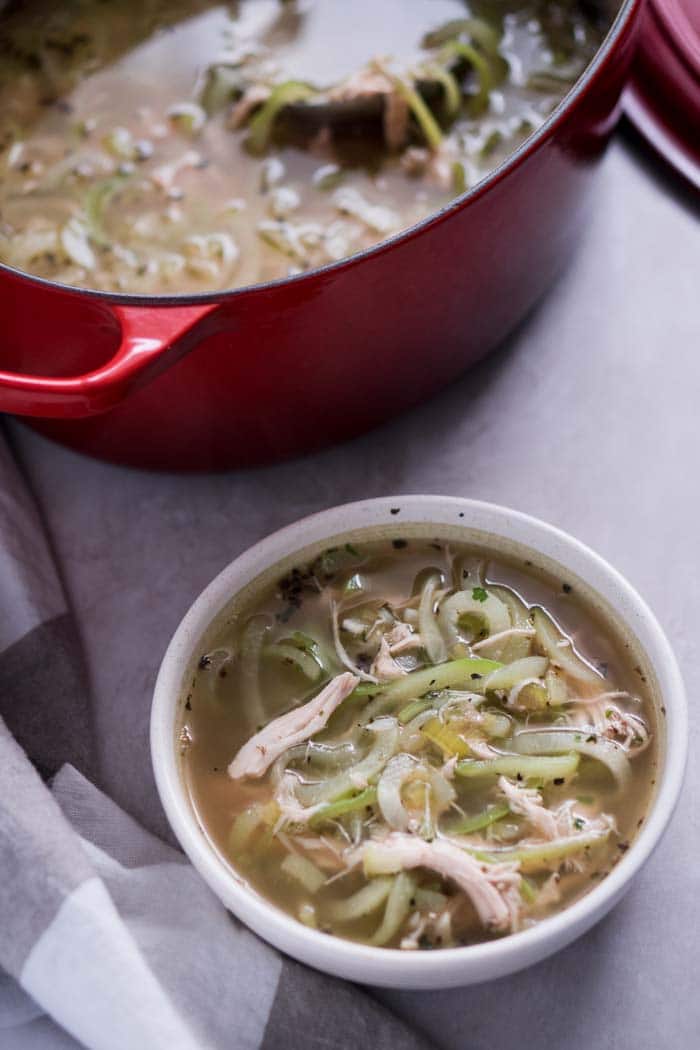 Looking for other keto noodle recipes? 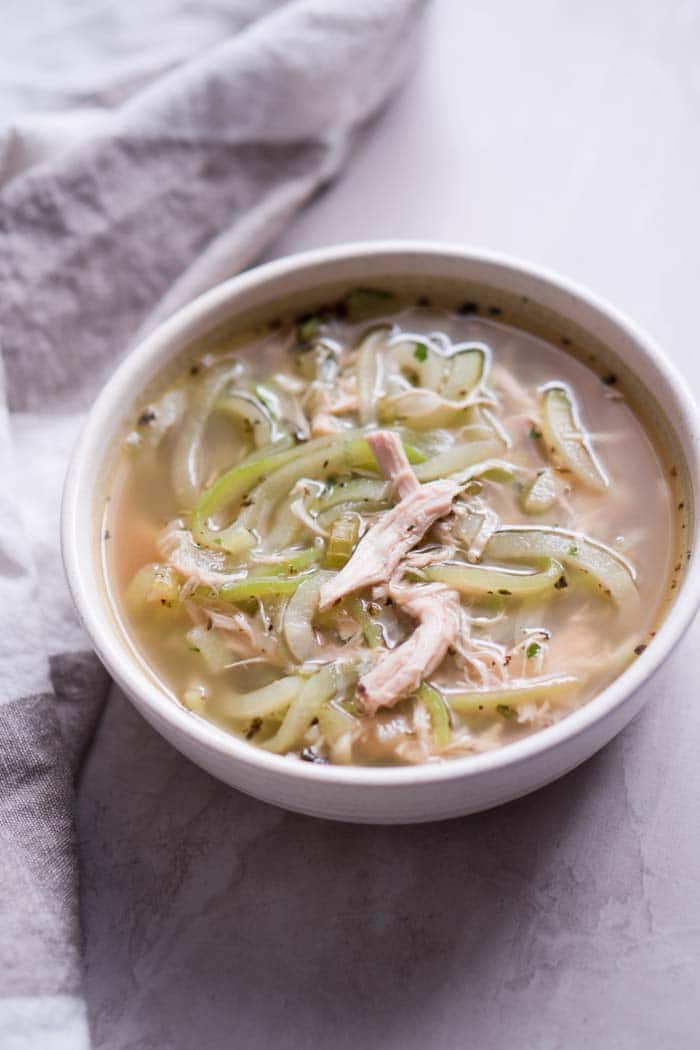 If you enjoy the keto chayote chicken noodle soup recipe, be sure to leave a comment and rating below! 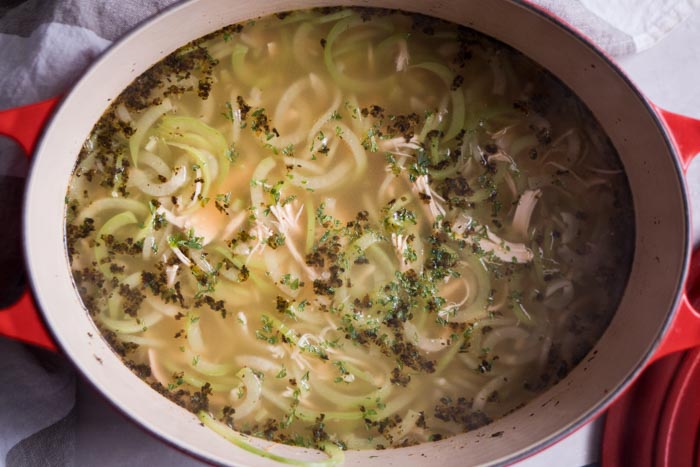