If you love Shake’N Bake-style pork chops, you are going to love this keto pork chops recipe! Just like mom used to make without all of the carbs. The recipe for the keto shake and bake mix is an excellent low carb, gluten-free alternative to the store-bought breadcrumbs we grew up with.

Don’t forget to PIN IT for later!

According to the nutrition label, your original Shake’N Bake mix has roughly 7 grams carbs in the coating of one pork chop. That’s a pretty high carb count for such a small amount of breading. But it’s no surprise; the mix is made up of primarily wheat flour and sugar. To make keto breadcrumbs, we’ll need to cut the carbs from the equation: nix the flour and sugar entirely. 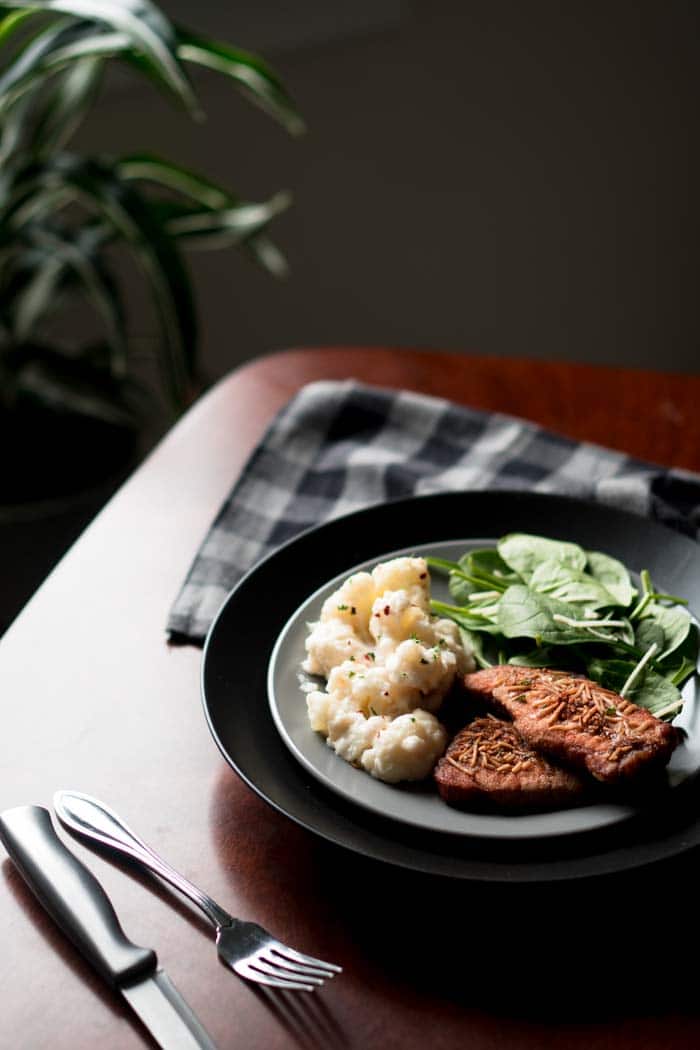 Instead of high carb ingredients for the base of the mix, we used psyllium husk powder. The primary and only component of this powder is psyllium husk fiber. Many people use it as a dietary supplement, but I’ve found that it lends itself to a variety of keto baking projects quite well. As far as keto breadcrumbs go, psyllium husk makes an excellent foundation. It’s entirely fiber, which means there are zero net carbs in the powder. Yay! You can order it off of Amazon, or you can usually find it in the supplement section of your grocery store. It’s a fun ingredient to play around with, even if – shock, horror! – you aren’t really that into breadcrumbs.

The psyllium husk covers the breadcrumb texture, but to get the flavor just right, we added a little salt, paprika, oregano, onion powder and garlic powder. Mix it all together in a zipper-lock bag, and you’re ready to shake your keto pork chops. 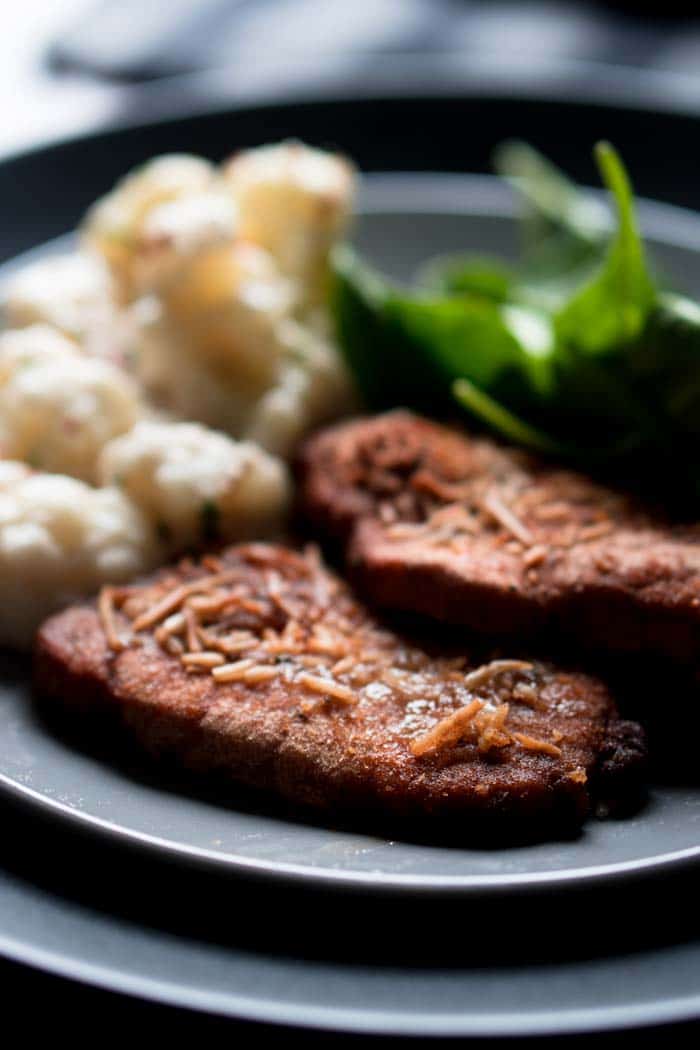 To prepare your keto pork chops, it’s super simple. Preheat your oven to 350 degrees Fahrenheit, then rinse your pork chops under water. Strain off the excess, dripping water and toss your pork chop into the bag with your keto breadcrumb mixture. Now, shake it like a polaroid picture! Or, um, like a Shake’N Bake pork chop. However you decide to shake it, just make sure the chops are covered in the mixture.

Put the breaded pork chops on a wire rack over a baking sheet, then pop in the oven for 30 minutes or until the internal temperature of the meat has reached 145 degrees Fahrenheit.

Side note: I topped these chops with grated Parmesan in the photos for a little garnish, contrast, je ne sais quois… I don’t really know. But it quite literally added nothing notable to the flavor of the dish. Don’t bother topping with cheese, please save yourself the calories and skip that silly business altogether. 😉

Try one of these! 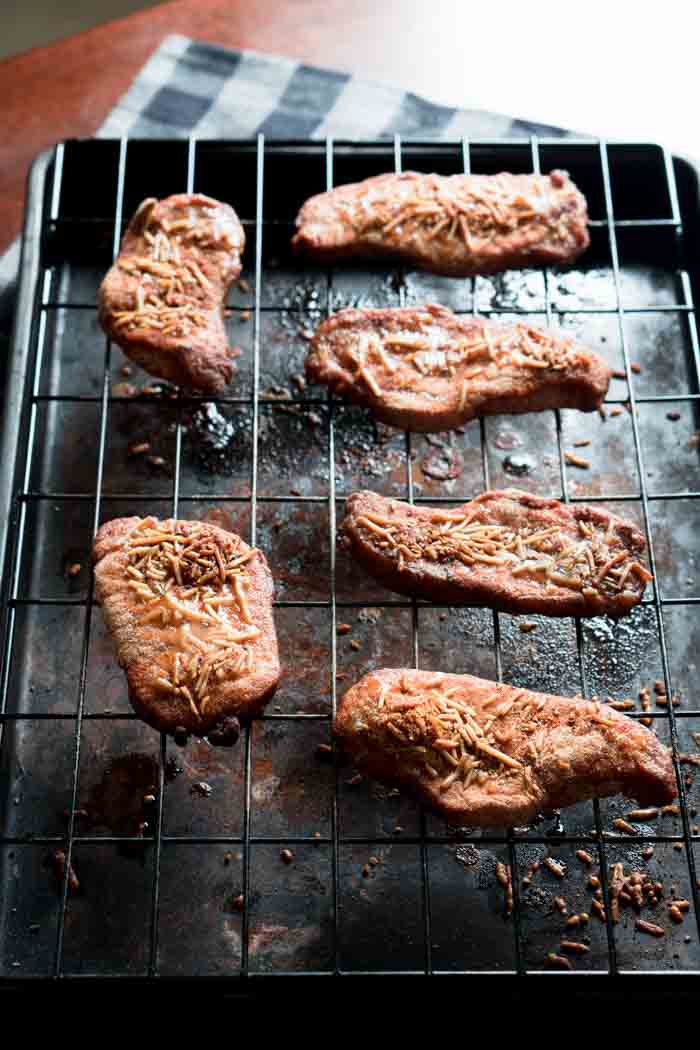 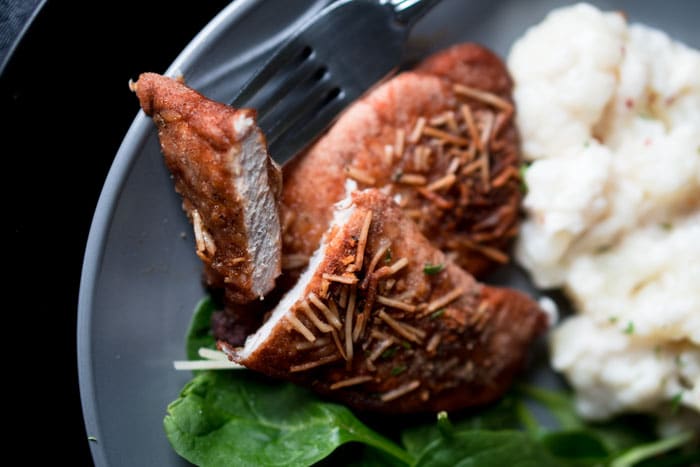