Have you ever had cinnamon on chicken? It’s a surprising combination that delivers a unique flavor. My low carb chicken thighs recipe pairs cinnamon with mint and coconut for a drool-worthy keto dinner. I present to you, baked cinnamon chicken!

The first time I experienced the magical cinnamon-chicken combo was at a 4th of July cookout. This grand tasting happened years ago, but I remember it like it was yesterday. I was hanging around the grill, eyeing the spices and seasonings when the cinnamon caught my eye. Sure enough, as soon as my friend lifted the lid, he thoroughly coated the chicken with cinnamon.

I was shocked. Thinking one of the bottles had been drunkenly swapped (it was that kind of party), I tried to help. “Whoa, bro. I think you’ve made a mistake! You just put cinnamon on the chicken!” 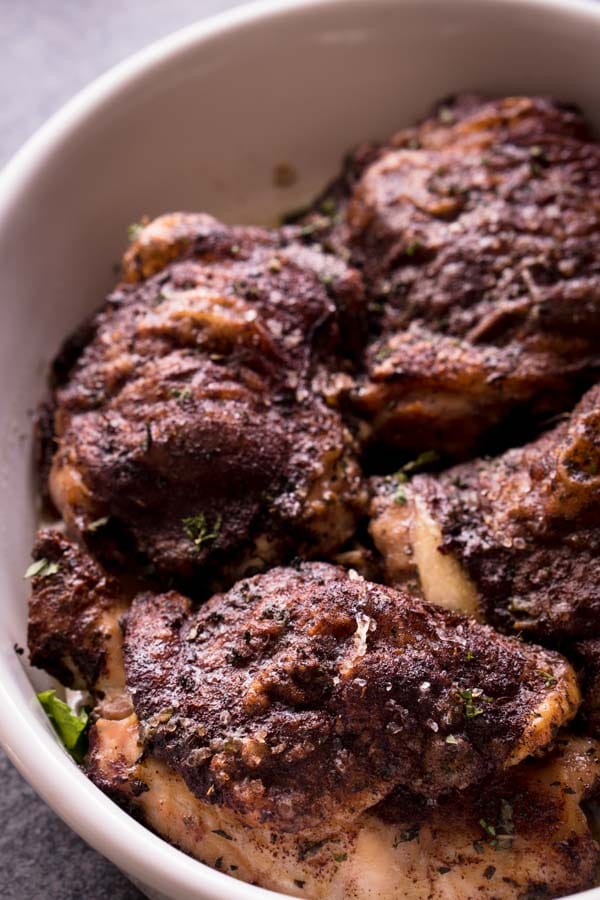 He turned and gave me the official Don’t-Be-Stupid look. That was enough to keep me quiet until I could taste it for myself. When the chicken was ready, I was the first to dive in. That cinnamon chicken was the best damn chicken I had ever tasted. I was blown away!

I grew up in a restaurant, I binge watch cooking shows while most people keep up with the Kardashians, and I spend 90% of my day in the kitchen… yet somehow a cinnamon chicken recipe had entirely escaped me until that moment. I’ve spent the last decade since playing with the cinnamon-chicken flavor combo in different dishes. This low carb chicken thighs recipe highlights the star ingredients while complementing the flavors with a fresh coconut-mint sauce. 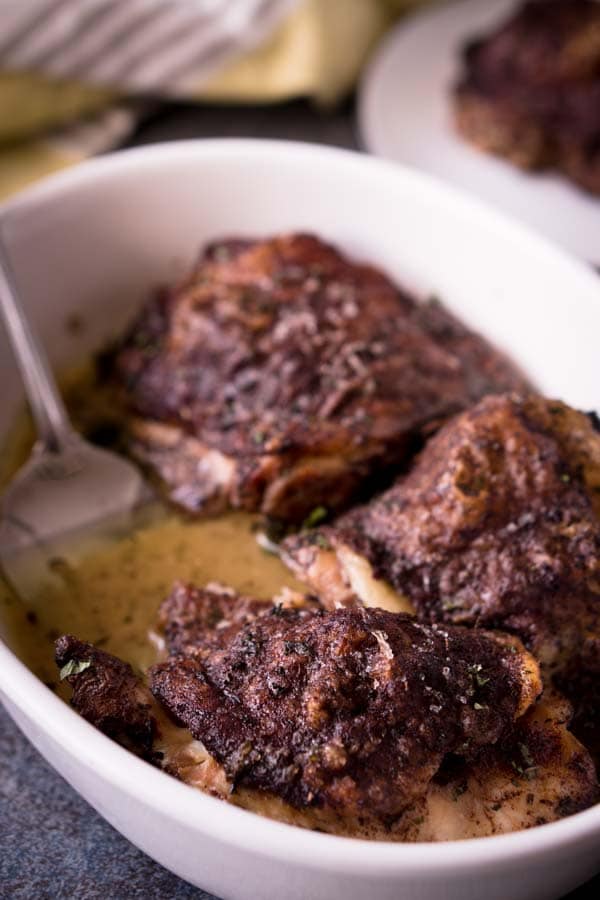 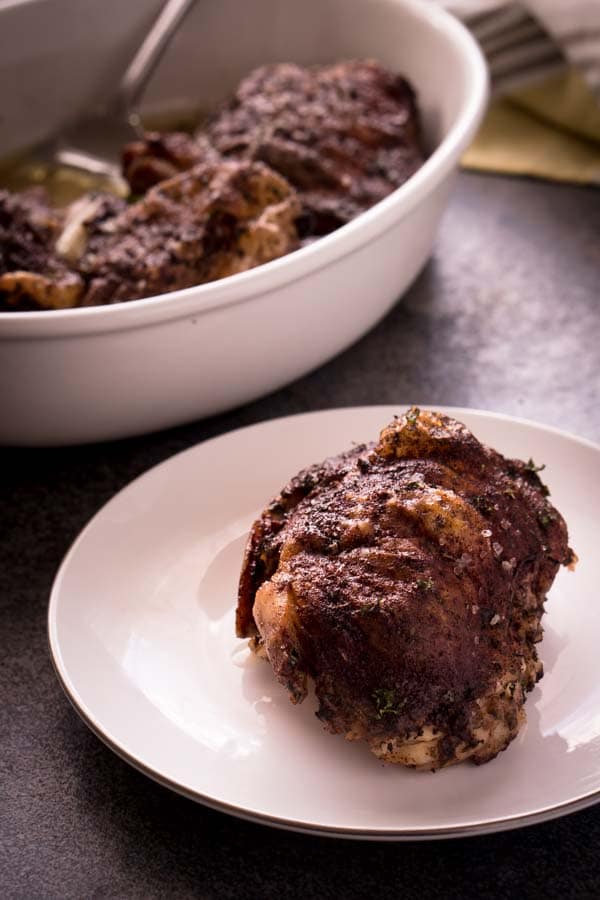 Mix ground cinnamon, minced fresh mint, dried basil, and sea salt. Thoroughly coat the chicken thighs with the mixture, focusing the majority of the mix on the top side of the thighs. If you’ve got the skin on, be sure to coat underneath directly on the thigh meat as well as on top of the surface.

Combine coconut milk, chicken broth, ground cinnamon, mint, and salt in a casserole style bakeware and mix thoroughly to coat the bottom of the dish. Choose a cooking vessel that will allow the edges of the chicken to touch while laying flat on the bottom; this will expose each chicken thigh to the coconut mixture. For six chicken thighs, I use a 9 x 6-inch dish that’s two inches deep. 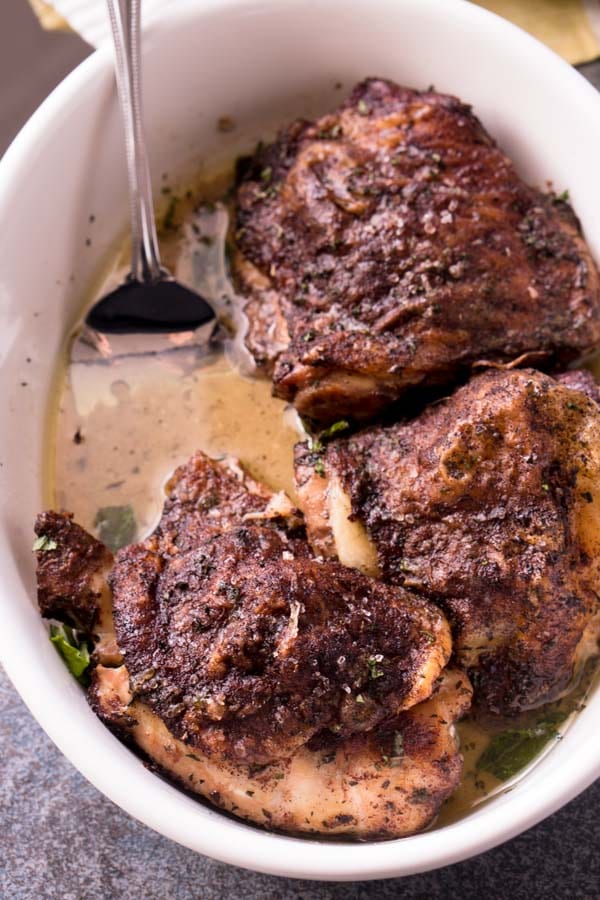 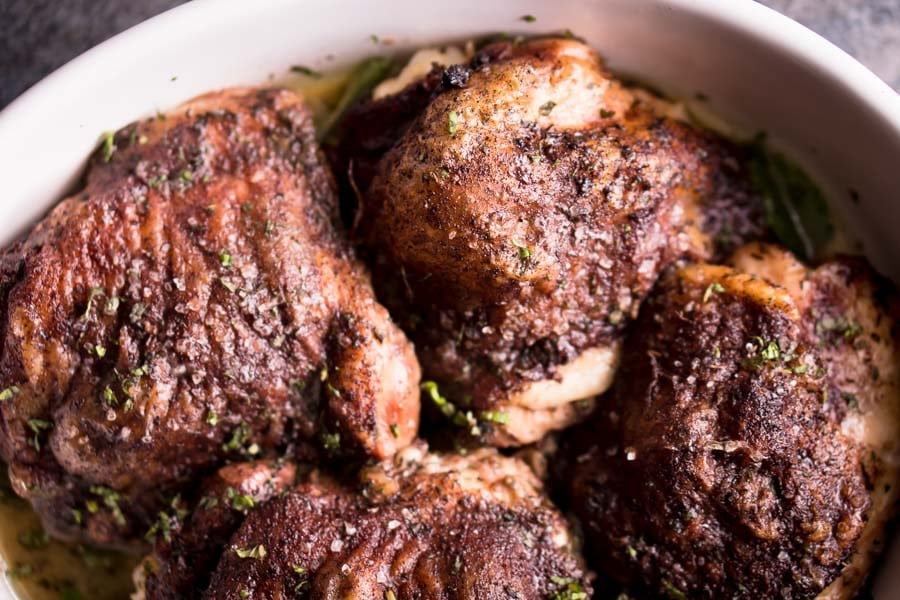