Meet Dan Quibell, the man behind The Bacon Experiment, a 30-day bacon fast (or feast…?). For 30 days straight, Dan consumed nothing but bacon, and the results will shock you!

The Bacon Experiment came into my radar through a Facebook group focused on the ketogenic lifestyle. This was all around the time I had just got back on the keto wagon; the timing really couldn’t have been more perfect.

While I found the experiment to be a bit extreme, I was intrigued and inspired by the determination displayed and the results achieved.

I felt a genuine sense of camaraderie among the folks in his group. It’s a community of like-minded low carb folks that encourage and motivate each other. If you’ve got a Facebook, you’ve got to go check it out! And for those interested in conducting your own bacon experiment, you can download this free PDF walk-through and guidelines to ensure you are on the right track.

Recently, I reached out to Dan for an interview to pick his brain about The Bacon Experiment and ketogenic living. He graciously agreed! 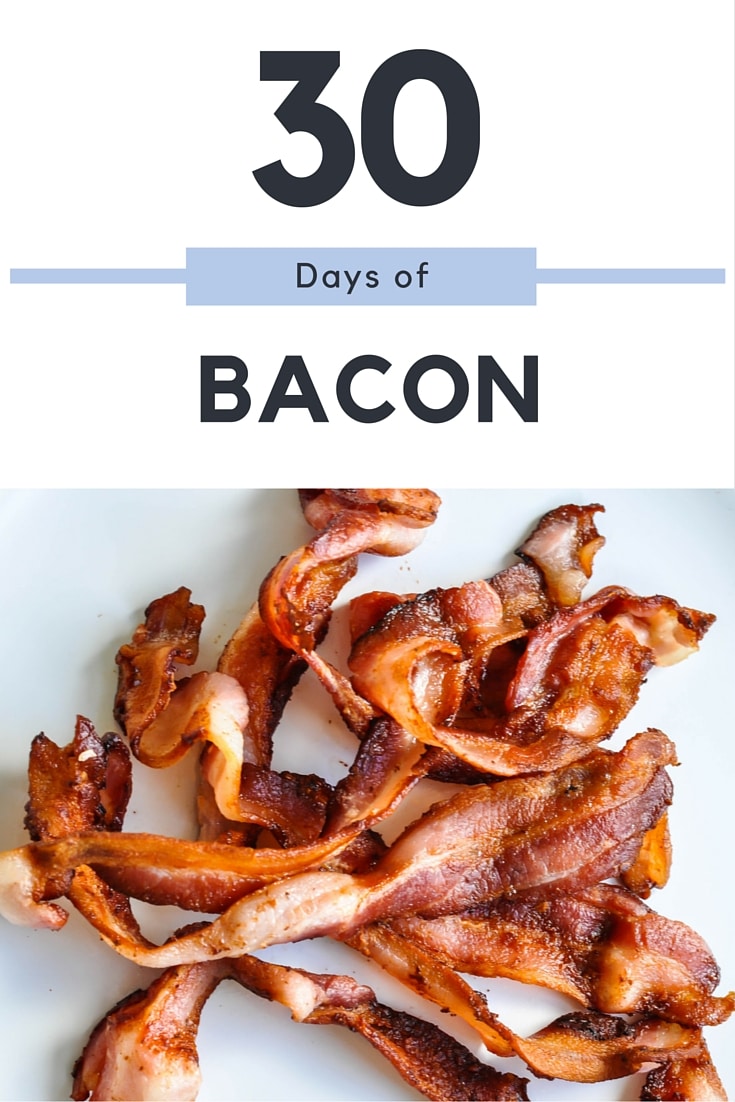 Thank you so much for taking the time to answer my questions, Dan. Walk me through The Bacon Experiment step-by-step. What were your goals and expectations going into this?

Dan: The Bacon Experiment was me eating nothing but bacon for an entire month. Two pounds of bacon, or roughly 30 pieces, every day. The goal here was to get people’s attention using BACON, then try to teach them something about low carb and ketogenic diets and all the benefits that come with it. Cutting out carbs has been life-changing for me, and I wanted others to benefit as well. I expected that even though I was eating 2500 calories a day, an increase of 500 calories a day for me, that I would not gain much weight, I already knew that eating fat and protein doesn’t make you fat.

The long answer: bacon has a great fat to protein ratio, and if there were one food I could eat for a month it would be bacon. It also already has the salt/sodium that low carbers need built right into it. The more I researched it, the better it looked; pork has a better amino acid profile than beef even. Bacon also seems like the perfect food to get people interested in this “diet”… how many other diets allow you to eat bacon?

What results did you see?

Dan: The biggest and most unexpected change was losing so much body fat in the 30 days. I lost 19.6 pounds by the end of the month and ate 60 pounds of bacon during that same time! Crazy right? My energy was good the entire time and my doctor was quite impressed with my blood work. I had a complete blood panel done before and after this experiment. My blood pressure dropped 30 points, my cholesterol numbers looked good, and my liver markers were perfect. My Dr. told me, “Keep doing whatever it is that you’re doing because it’s working!” I still eat bacon most days for breakfast.

After seeing your results, have others joined in on The Bacon Experiment?

Dan: The Bacon Experiment Facebook group has over 2500 members currently and has been slowly growing. Quite a few have tried their own version of the bacon experiment for one week, and most have seen between a 4 to 11-pound weight loss in just one week. Some transition to a ketogenic or even zero carb diet after trying it out for a week.

Want to conduct your own bacon experiment?

Get Dan's free guide to get started!

What was your diet like before The Bacon Experiment?

Dan: I have tried just about everything over the years including low fat, low calorie, vegetarianism, veganism, raw foods, and even fruitarianism. Yes, I was the guy buying a case of bananas and bag of organic apples each week for a while. Most of these things made it, so I lost some “weight, ” but unfortunately I also lost muscle and would then regain the weight plus extra. For the year leading up to the bacon experiment, I had discovered something new, something sustainable and a way to GAIN muscle and LOSE fat! You guessed it, a Low Carb High Fat Ketogenic Lifestyle. Getting enough protein and the remainder of my energy requirements from fat (all from real food sources like organic grass-fed butter, free-range eggs, wild caught salmon and grass-fed beef) proved to be life-changing for me. After a year I was ready to tell other people about it and show them how to do it as well. The Bacon Experiment was born.

Do you track your macros? What do they look like for a day?

Dan: The only macro I track/tracked before and after the experiment is protein really. I no longer track carbs because I am not really eating many veggies these days other than toppings for my bun-less burgers. I make sure I get between 120-150 grams of protein a day. My carbs are probably between 8-15 grams a day since 90% of my diet consists of meat and eggs. During the bacon experiment, my macros were the same each day since I ate exactly 1 pound of normal strip bacon each day and 1 pound of back bacon each day. This worked out to 244 grams of protein and 164 grams of fat roughly after being cooked. That is roughly 2500 calories.

Do you still eat bacon or are you sick of it?

Dan: I ate bacon for breakfast today. I don’t think it’s possible for me to get sick of bacon.

After 30 days of bacon, I imagine you’re a bit of a bacon connoisseur. Can you tell us what your favorite cuts of bacon are? Do you have a specific brand you can recommend?

Dan: When I ate only bacon for 30 days, I made sure it was the highest quality stuff I could find. It was pasture raised, antibiotic free, non-GMO and steroid free. It was also $11 – $12 per pound. Instead of having to get a loan to buy bacon, I now try to get thick cut bacon of whatever brand is on sale. I’m in Canada, so not sure if it’s available everywhere, but Presidents Choice Thick cut has been my favorite find so far. It tastes as good as the expensive farm bacon that I ate during the experiment.

How about the method of preparation? How do you prep your bacon to get the perfect cook?

Dan: Depends on the thickness to determine cooking times, but oven cooked on a cookie sheet is a really good and reliable method. 400 degrees for about 18 mins. The best way is deep frying in bacon fat/grease. I had 2-3 cups of bacon fat at one point in my frying pan, and the grease was an inch thick. I made sure I had a lid to keep the splatter in and would deep fry the bacon for a few minutes on each side. It turned out AMAZINGLY PERFECT.

Aside from bacon, what’s your favorite keto meal?

Dan: For taste and satisfaction, I would say a triple bacon cheeseburger without a bun, of course. I would probably include some chipotle mayo that I would make myself. For health and longevity, I would say grilled, or fried wild caught salmon with a bit of apple cider vinegar, Himalayan salt, and organic turmeric to absorb as much of the omega 3’s and DHA possible.

Did you find it difficult to eat one thing for 30 days straight? If so, how did you find the willpower to stay the course?

Dan: The final week, I was REALLY craving steak. But it wasn’t really as hard as I thought it might be to get through the 30 days. I made some bone broth from grass fed beef bones to get me through the last week.

Do you have any advice for those just starting a ketogenic diet?

Dan: Become a student and continue to learn every single day. Join the ketogenic and low carb community. That doesn’t mean you have to spend all your time talking about it, but when you see other peoples results every day, I don’t see how anyone could not be motivated. The benefits to blood sugar control, the weight loss success stories, the health issues that disappear. The results clearly speak for themselves. 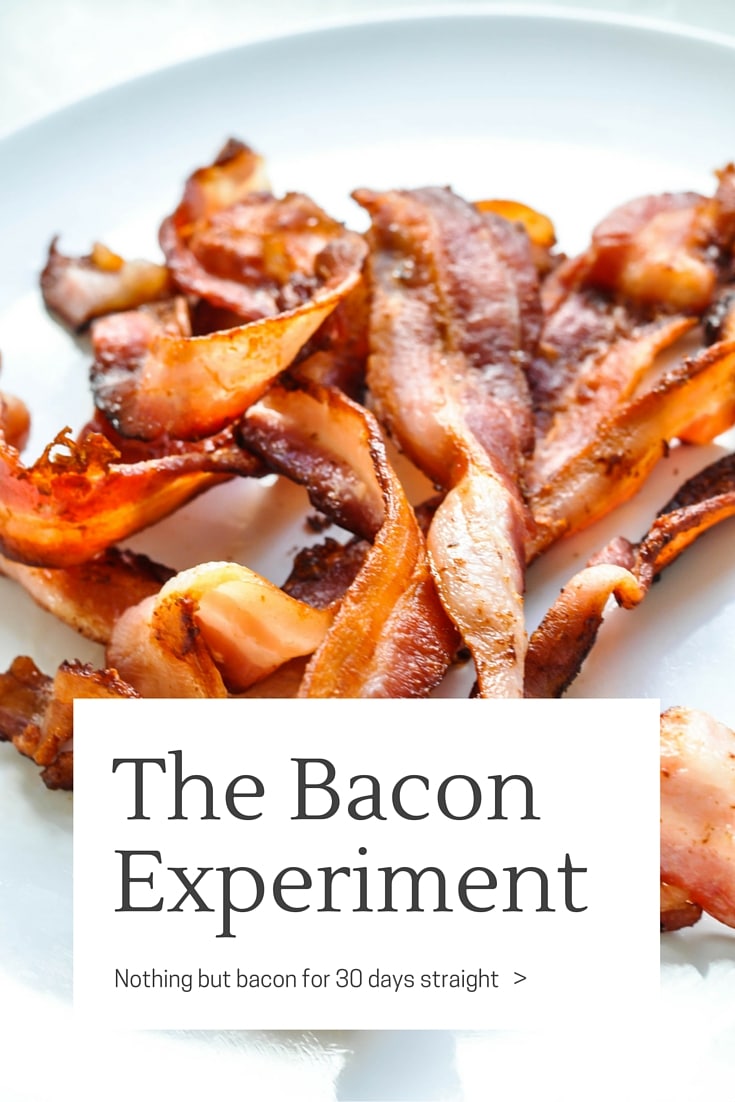 Takeaway #1: Eating fat does not necessarily make you fat. In fact, a low carb, high-fat diet can be a great way to improve your body composition by simultaneously lowering body fat and maintaining muscle mass.

If you’d like to learn more about Dan and The Bacon Experiment, visit his Facebook group here:

And don't forget to snag your free guide!

Do you think you could eat nothing but bacon for 30 days straight? Have you ever tried a zero carb diet? Let me know in the comments below!