This smoked beef jerky recipe has been a long time coming! I’ve always been a jerky fan through and through; I eat it daily during the summer months when we’re in adventure-mode, camping nonstop or out exploring trails all day. Homemade jerky is a godsend when you’re in these situations. Easy to pack in, super low carb, and incredibly delicious! About a year ago, I learned how to make beef jerky in a smoker instead of an oven or dehydrator. Game. Changer. Since I know firsthand how frustrating it can be to find a keto beef jerky that isn’t loaded with carbs and sugar, I wanted to share my smoked beef jerky recipe with you as soon as I got my beautiful (seriously, it’s GORGEOUS! 👸) new Traeger grill.

Honest Babe: This grill was provided by Traeger Pellet Grills©. All thoughts and opinions are my own. 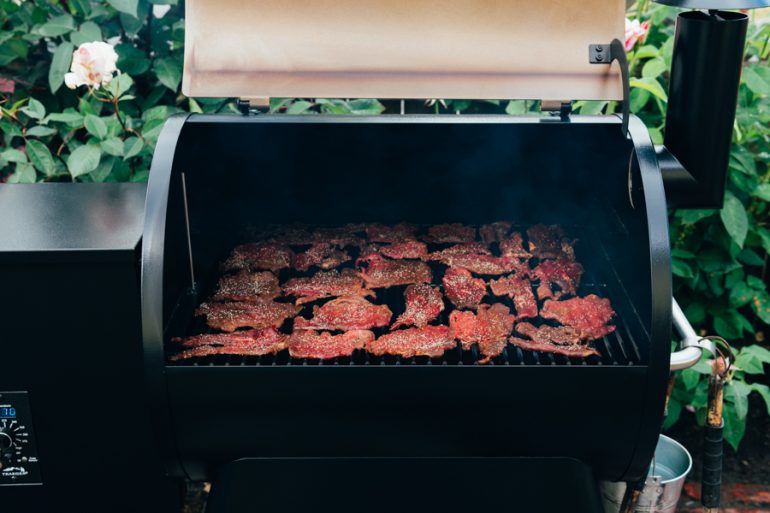 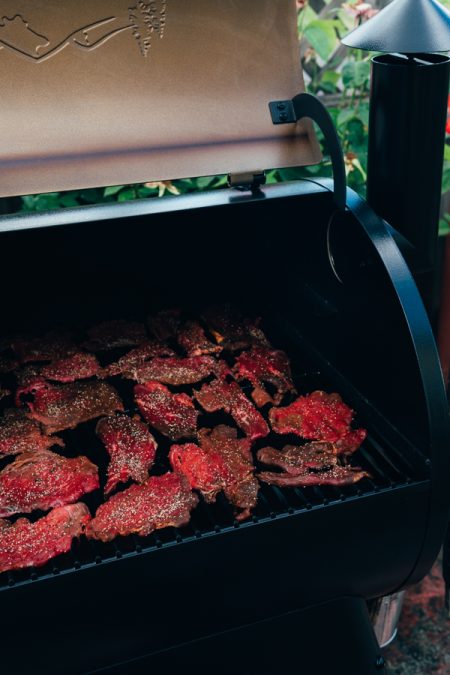 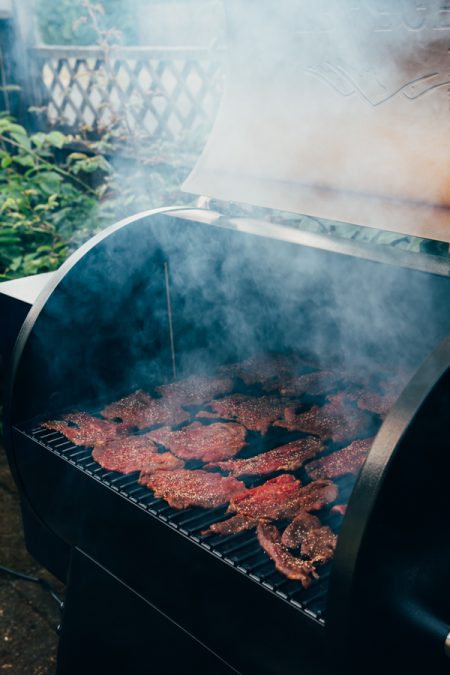 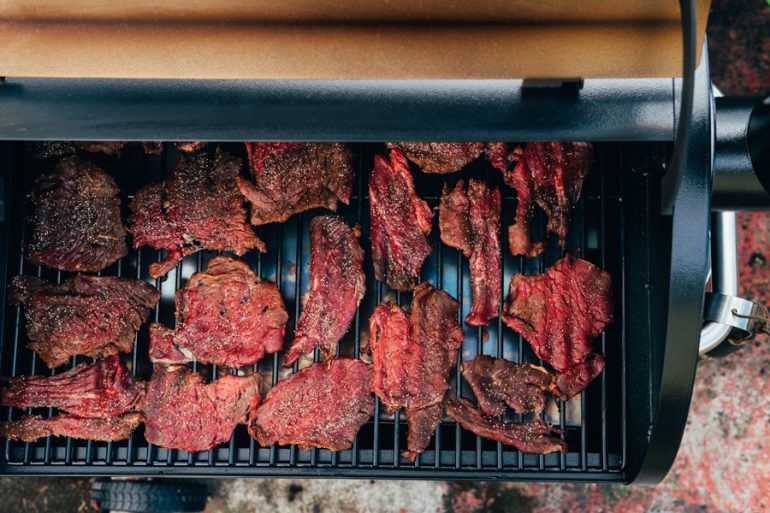 If you’re an avid reader of the site, you might recall from some of my previous recipes that I used an old charcoal smoker. Some might call it an “entry level” smoker, but I won’t church it up; it was a sad little grill that I adopted for $20 after being neglected in a stranger’s backyard. It was fun to learn with but to say that I was excited to upgrade would be a definite understatement. And boy, is this Traeger one hell of an upgrade!

I’ve always been a bit intimidated by the bigger grills, but this is as “set it and forget it” as possible. You put wood pellets in, turn a little knob, boom, you’re ready to cook. You know where you can find me all summer! I’ll be in my tiny garden, pretending it’s an outdoor kitchen: cold drink in one hand, tongs in the other, hair smelling of applewood and hickory. 😍 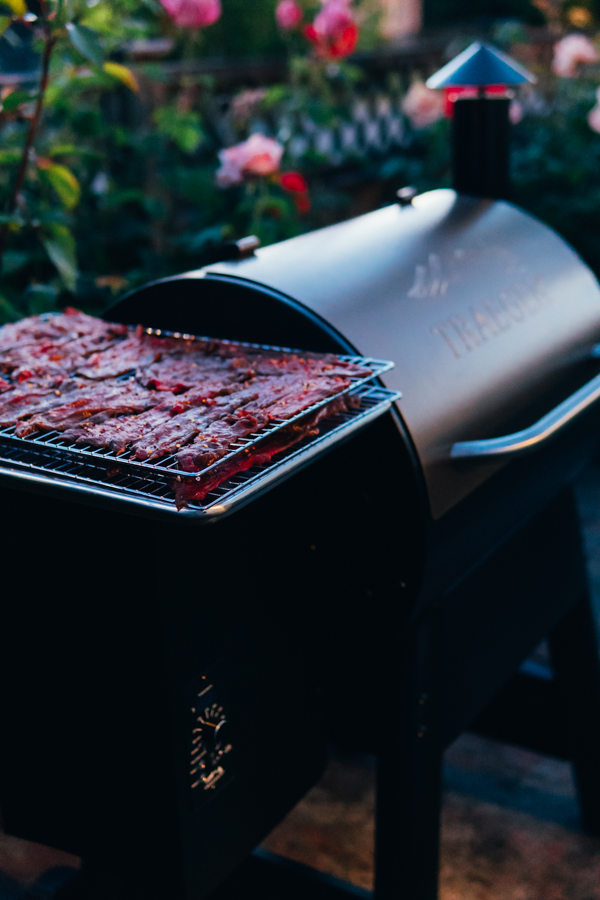 Let’s talk about carbs in beef jerky for a minute. Those little packs of jerky at the store can run you anywhere from 5 to 15 grams of carbs per ounce. And I don’t know many people who can eat just one ounce of beef jerky once they get started!

In a pinch, storebought beef jerky isn’t the worst food choice you can make, but it’s always good to be cautious. The ingredients and nutrient composition of jerky can be deceiving. You wouldn’t think little slices of meat could pack so many carbohydrates, but most jerky marinades are loaded with sugar. It can add up if you aren’t mindful of it. Luckily, you now have my homemade smoked beef jerky recipe! 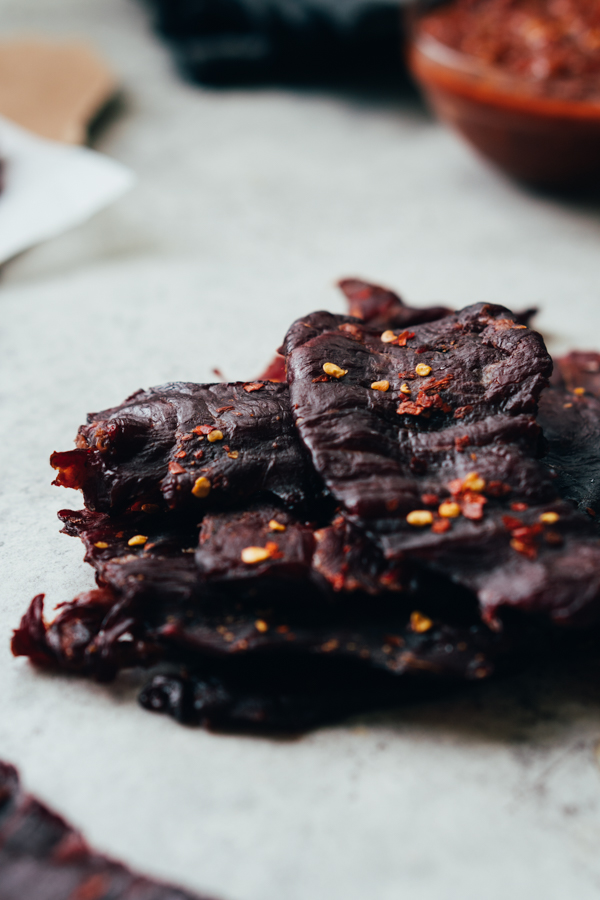 First things first, you’re going to want to pick up a nice cut of lean meat for your smoked jerky. I like to use top round beef because there isn’t much fat or connective tissue to trim off during prep and it has a pleasant texture for jerky. Eye of round or bottom round works well too! You’ll want to grab about two pounds of raw meat per pound of jerky produced. The meat loses moisture as it cooks and the overall weight will decrease by about half, so keep that in mind if you’re aiming for a specific yield!

You’ll want to slice your meat thinly. I use a meat slicer because I’m that person that has a gadget for everything, including an industrial-style meat slicer. No meat slicer? No problem! You can just use a super sharp knife to cut thin pieces of beef. Go slow and try to get even-thickness throughout, aiming for about 1/4-inch. Ideally, the jerky will all cook at the same pace, but thinner pieces will cook more quickly, and thicker pieces will take longer. For planning and logistics, two pounds of meat sliced 1/4-inch fit perfectly across the lower rack of the Traeger grill (418 square inches) in one layer. If doing a larger batch of jerky, you can stack in additional jerky racks. 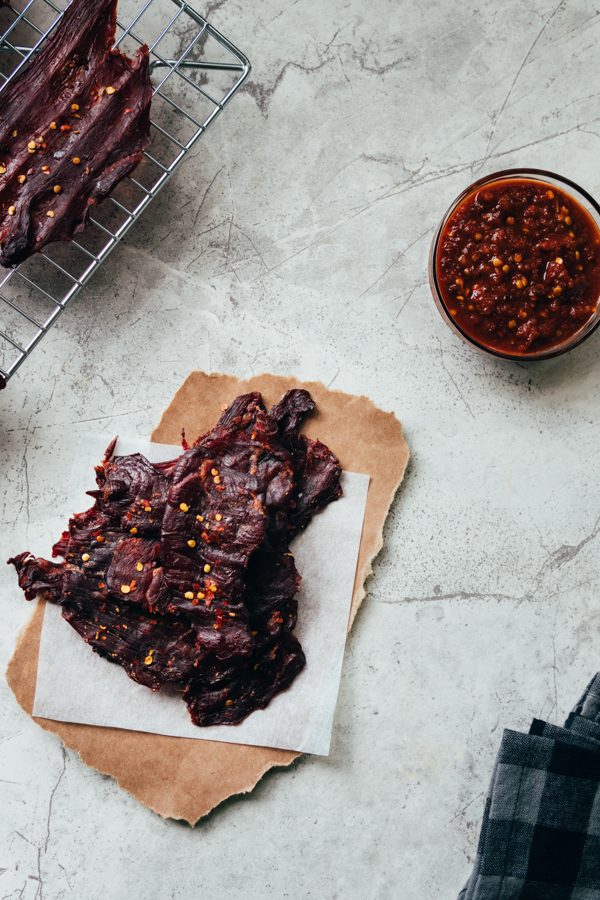 To keep the carbs low in my smoked beef jerky recipe, I opt to use coconut aminos as the base of my marinade and don’t use any sugar at all. Instead, I load up the spices and salt. I’ve included the recipes for two of my favorite marinades below. The more traditional jerky flavor marinade consists of coconut aminos, garlic powder, onion powder, and smoked paprika. For spicy beef jerky, I use coconut aminos, Thai garlic chili sauce, and sriracha for the marinade. My kids love the traditional flavors, but I like it hot!🔥

If you’re running short on time, you can choose to marinate the beef for a few hours instead of the longer time frame, but I like to marinate overnight and upwards of 24 hours. Seal the meat and the marinade in a zipper-lock bag, then pop it in the fridge until you’re ready to start smoking.

To prep the meat for the smoker, discard the marinade and dry the excess liquid from the meat with paper towels. I find it’s easiest to lay out beef slices on top of paper towels to wick away moisture from the bottom side, then blot from the top as well. If everything is laid out in a single layer during this step, it makes it easy to salt and season the meat too.

I always add salt after the meat has been dried and before smoking. If you are going to add any additional seasoning to your jerky, now would be the time to do it, so everything sticks well. If you’re following this recipe to a T, pair pepper with the traditional flavor marinade and/or sprinkle chili flakes on the beef from the spicy marinade. Feel free to get creative! 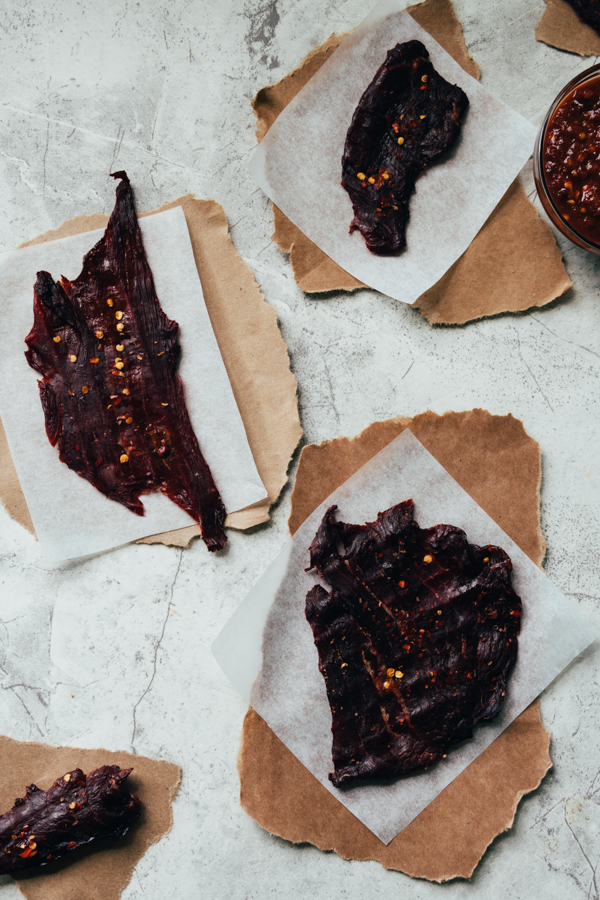 Beef Jerky in a Smoker

Now you’ll need to prep your smoker. I used hickory pellets, but you can use any variety of wood. It’s always fun to try different flavors. If you’re using a Traeger like mine (Pro Series 22), you will load the pellets into the hopper and turn the knob to smoke. That’s all it takes to get started! *Side note: if you do have a Traeger, I found an awesome subreddit with tips and tricks specifically for your grill. Super cool, r/Traeger!

Lay the slices of beef in a single layer directly on the grill grates or across jerky racks. Close up your grill and let the smoke work it’s magic for 4 to 5 hours, or until the smoked beef jerky is dry but pliable. Easy peasy!

Store your jerky in an airtight bag and pack it with you on your next hike, camping trip, or just running errands around town. Smoked beef jerky is the perfect on-the-go food; when you take the time to make it at home, you don’t have to worry about the carbs creeping in. Enjoy your jerky! 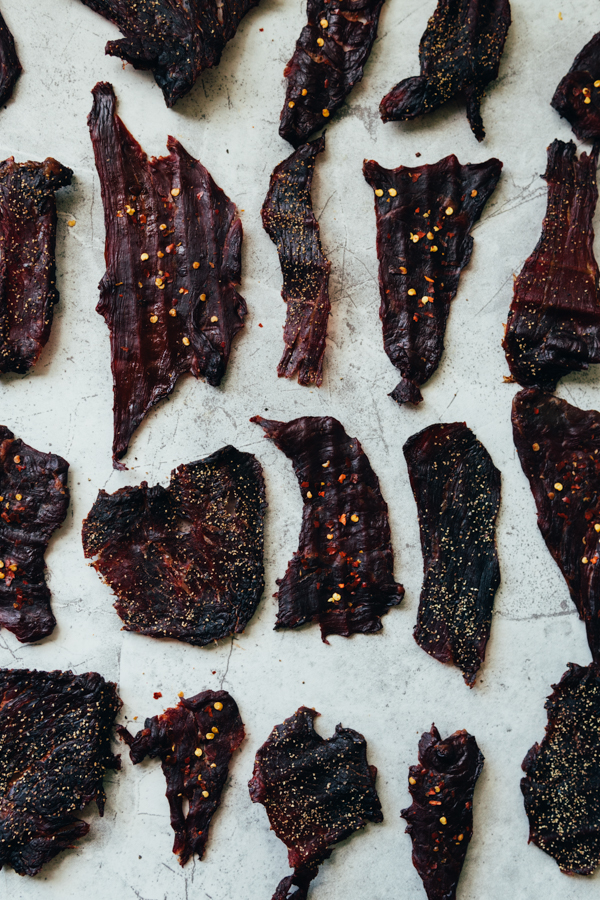 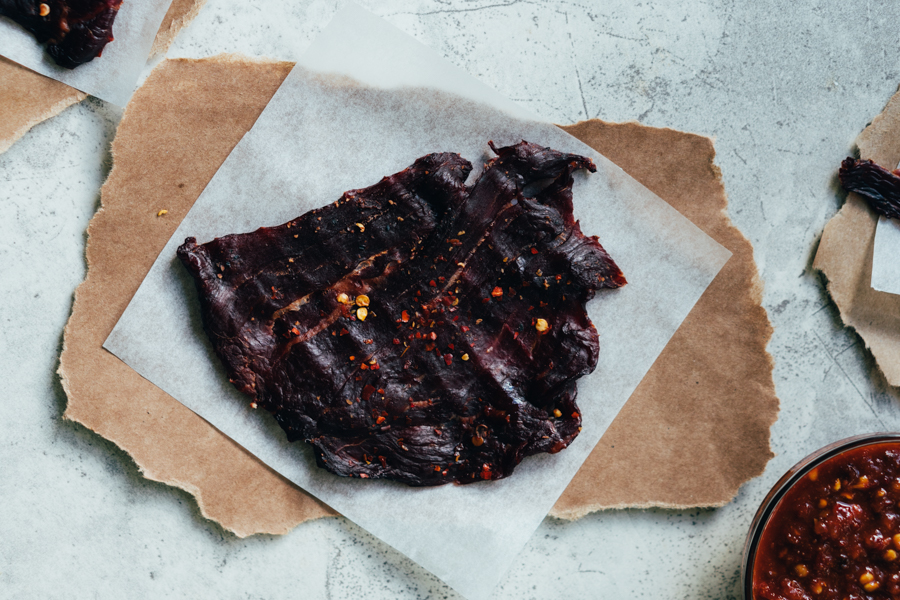