What better way to introduce the new blog than by sharing the recipe that has been a mainstay in our household for the past two years: low carb pizza.

It all started with a post-it note from my coworker. After discovering that we were both on a keto diet, she scribbled down a few lines, handed me the note, and said: “Trust me.” I scanned the makeshift recipe with apprehension. A pizza made of meat? And turkey no less? I know pizza; pizza is like my family. I’ve had just about every kind of pizza imaginable, and turkey was never invited to the party. And a low carb pizza at that? I wasn’t entirely sold on the idea but slid the post-it in my purse to avoid hurt feelings. Several weeks later, as I was cleaning out said purse, the sticky neon paper resurfaced. 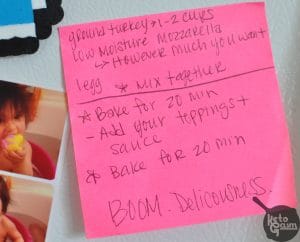 I shared the recipe with my guy and was rushed off to the grocery store to acquire all the fixings. What I saw as blasphemy to the pizza gods, he saw as everything his heart desired — meat on top of more meat. The only other time I had seen him that excited about food was when he found out that turducken is a real thing.

He needed meatza in his life.

We whipped it up that night and never looked back. This low carb pizza is outrageously delicious. Seriously. I slapped the post-it on my fridge after realizing the recipe was a keeper. It’s still there.

Since then, I’ve tweaked a few things, played around with the ratios, cooking vessels, and a variety of toppings. I prefer to use a cast-iron skillet

to get a nice crunch on the crust. Cast-iron skillets

get super hot and stay that way, which is great for searing meat. Since your crust is made of meat and cheese, the meat is seared nicely while the cheese crisps up.

If you don’t have cast-iron

, you can use any oven safe dish or pan as long as it has sides to prevent the grease from dripping out.

The bigger the pan, the thinner the crust and vice versa. So if you like a thin crust, consider using a pan with a larger surface area to spread out the ingredients.

The following recipe has all of my favorite pizza toppings and comes to a measly 22 grams of carbs for the entire pizza! That’s less than 4 grams of carbs per slice! Feel free to swap the toppings out for your own faves, just be sure to update your macros.

I like this low carb pizza better than the delivery we used to order every week! If that’s not a testament to how spectacular this recipe is… then I don’t know what is. You’ve got to give it a try!

Want to try another keto pizza recipe? Try my fathead pizza rolls, one of the most popular recipes on the blog!

What’s your favorite type of pizza? Let me know in the comments below! 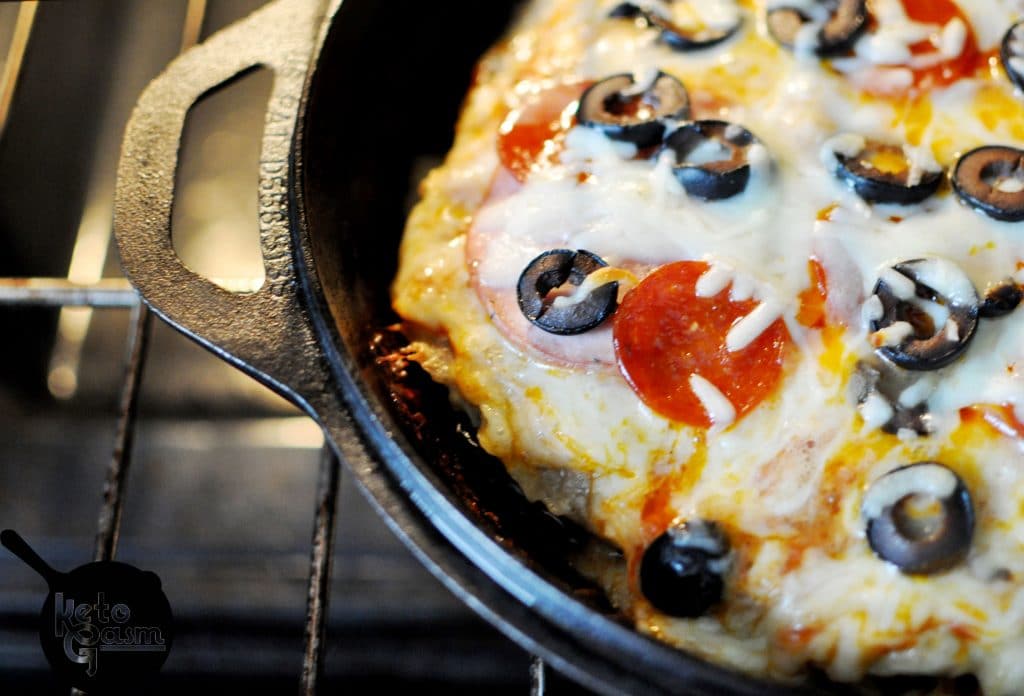 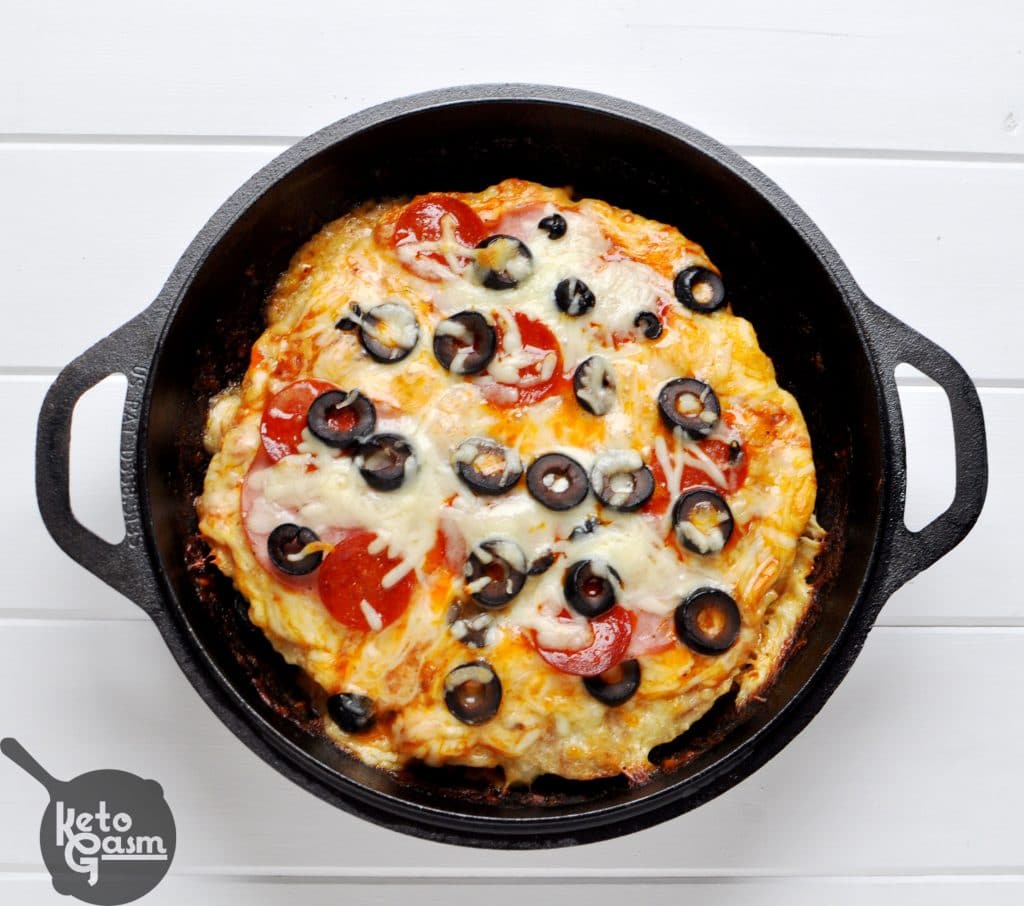 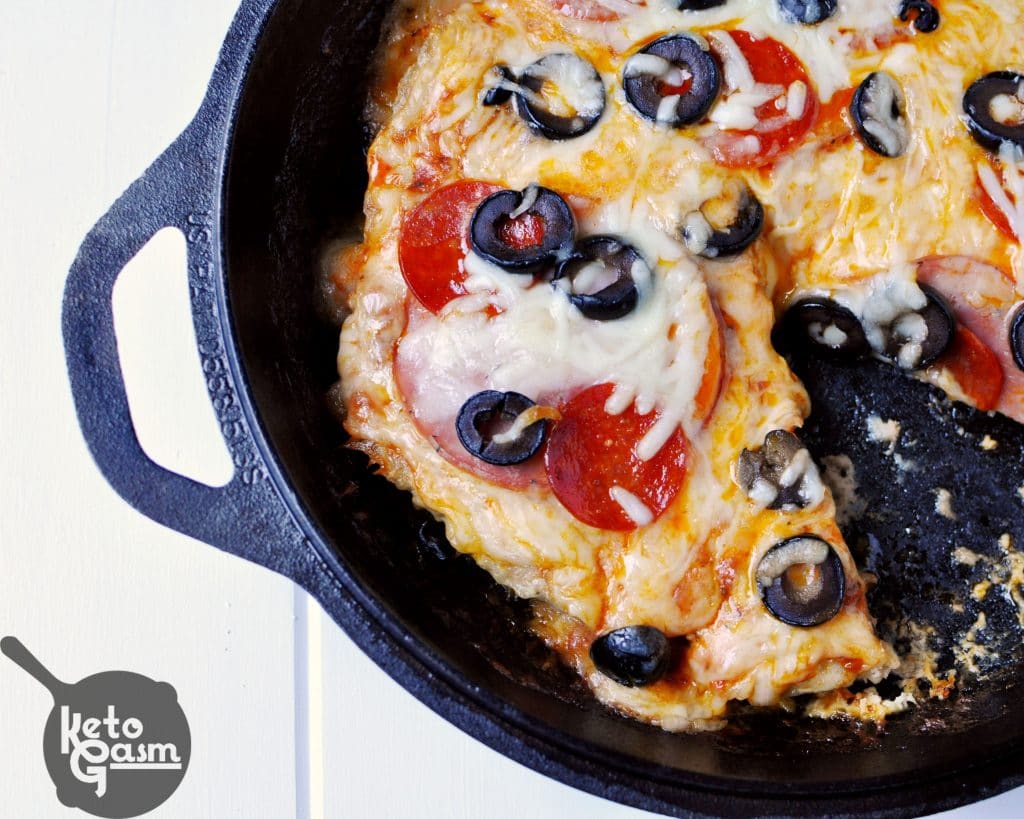 This post contains affiliate links – I get a small commission from purchases that will be used to grow this blog. Thanks for your support! 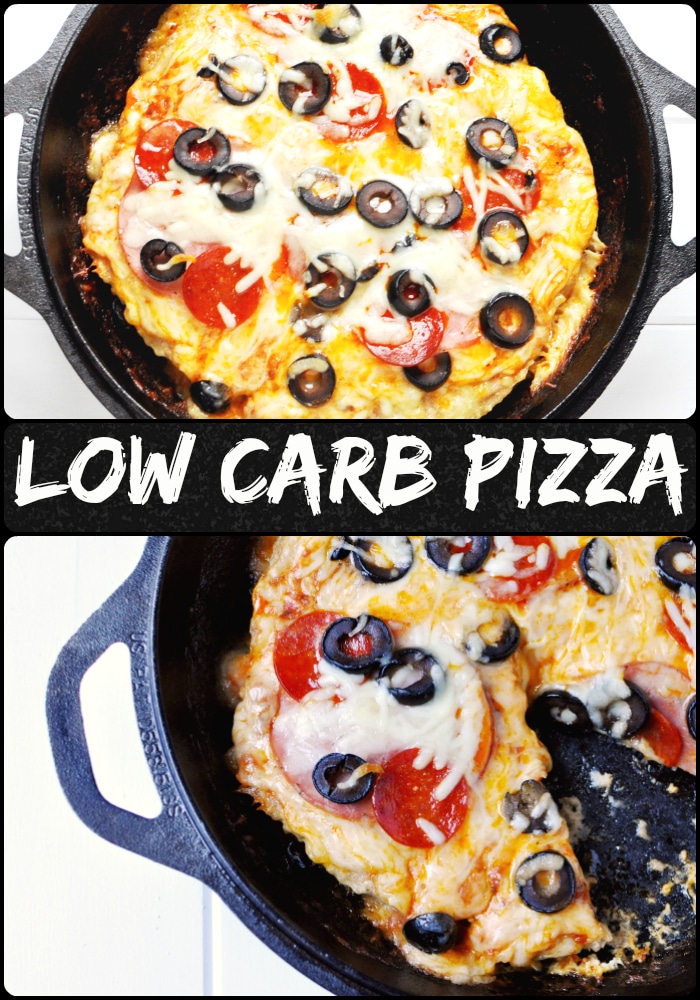