If you’re one of the many, many folks who chose the keto diet to help you lose weight, I’d be willing to bet that the last thing you need tempting you is a big sheet pan of keto brownies with undefined portions. After baking and waiting for your heavenly dessert to cool down, the only thing stopping you from diving face first into an 8×11-inch sized brownie is sheer willpower. Sure, some of us can cut off just a small piece, but it’s way too easy to fudge serving sizes and underestimate how much you’ve actually eaten. My solution? Keto brownie bites.

Don’t forget to PIN it for later! 📌 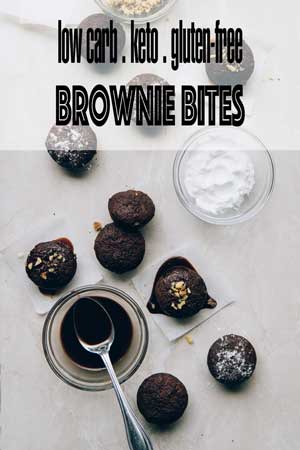 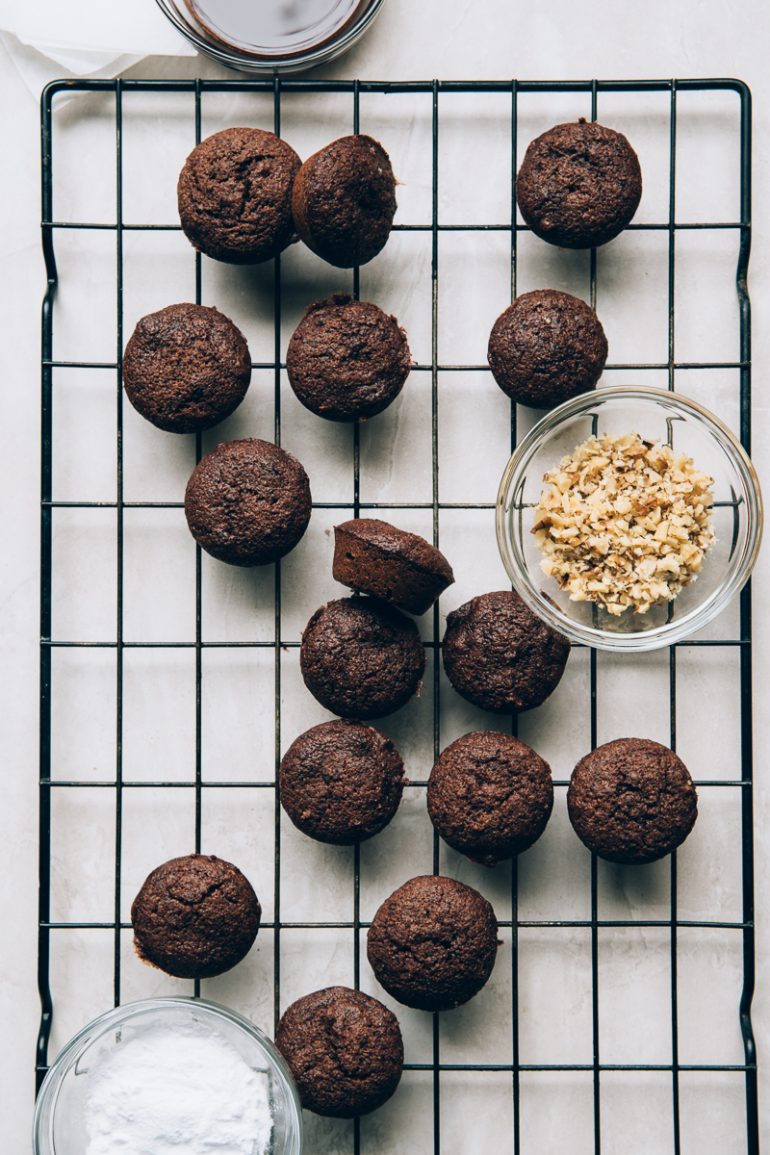 What are keto brownie bites?

It’s a lot easier to identify how much you’re eating if things are measured out with predetermined sizes. That’s why meal prep is such a widespread practice, and those portion control containers are flying off the shelf. It takes the guesswork out of your intake; how much you think you’re eating and how much you’re actually eating finally match up.

Of course, the most effective thing would be not to eat desserts and sweet treats in the first place. Lots of people do that! But I don’t think there’s anything inherently “wrong” with desserts as long as you are smart about it. I totally eat sweets on special occasions, I’m not a robot. Understand that just because something is low carb or keto, doesn’t necessarily mean you can eat unlimited amounts without it catching up to you. Calories are still a very real thing. 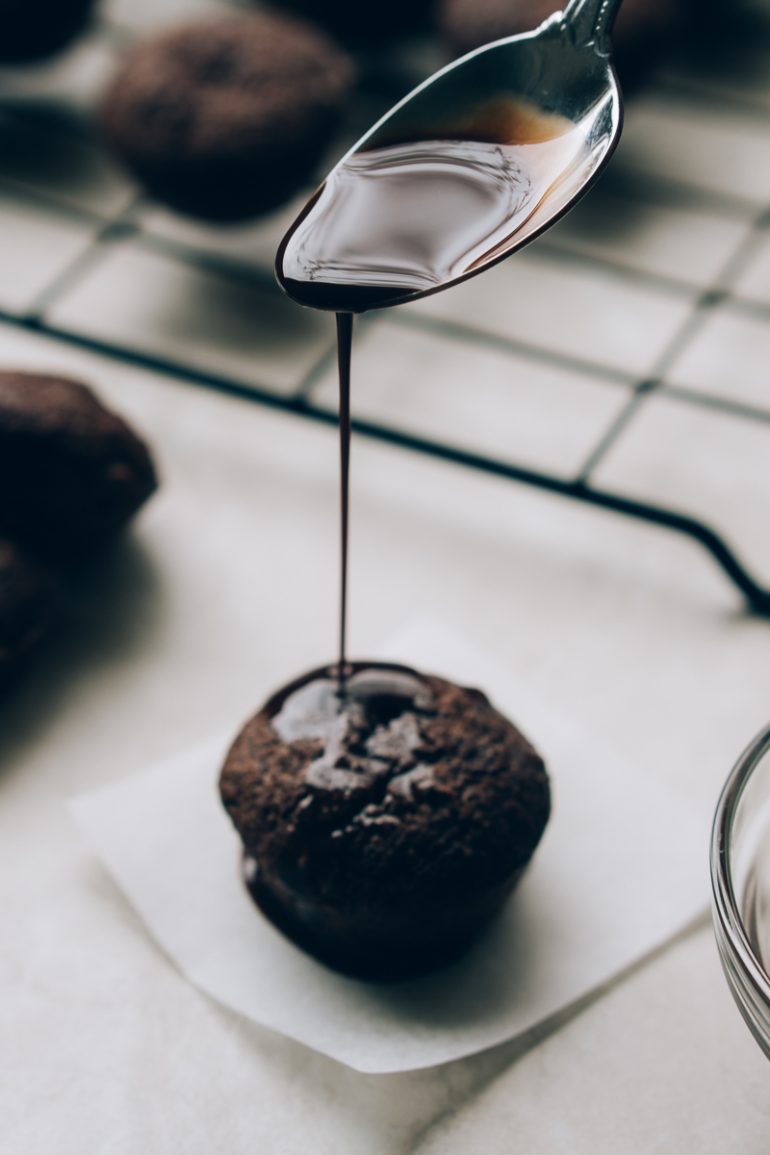 Keto brownies?! How is that even a thing?

These keto brownies are low in carbs thanks to a few specialty ingredients that I subbed in place of traditional brownie ingredients. After being divvied out into 16 mini-muffin sized brownies and subtracting both fiber and sugar alcohols, each little keto brownie bite only has 1 gram net carb! That gives you room to add toppings if you like, but it’s entirely optional.

I also used a low carb sweetener instead of regular white sugar. There are a ton of different options out there, but I have been digging the monkfruit/erythritol blends. Both monkfruit and erythritol have zero glycemic impact, and this sweetener just so happens to be zero calories as well. Plus it doesn’t have that weird aftertaste most sweeteners seem to have, which makes me happy dance like nobody’s business. LOVE! 😍 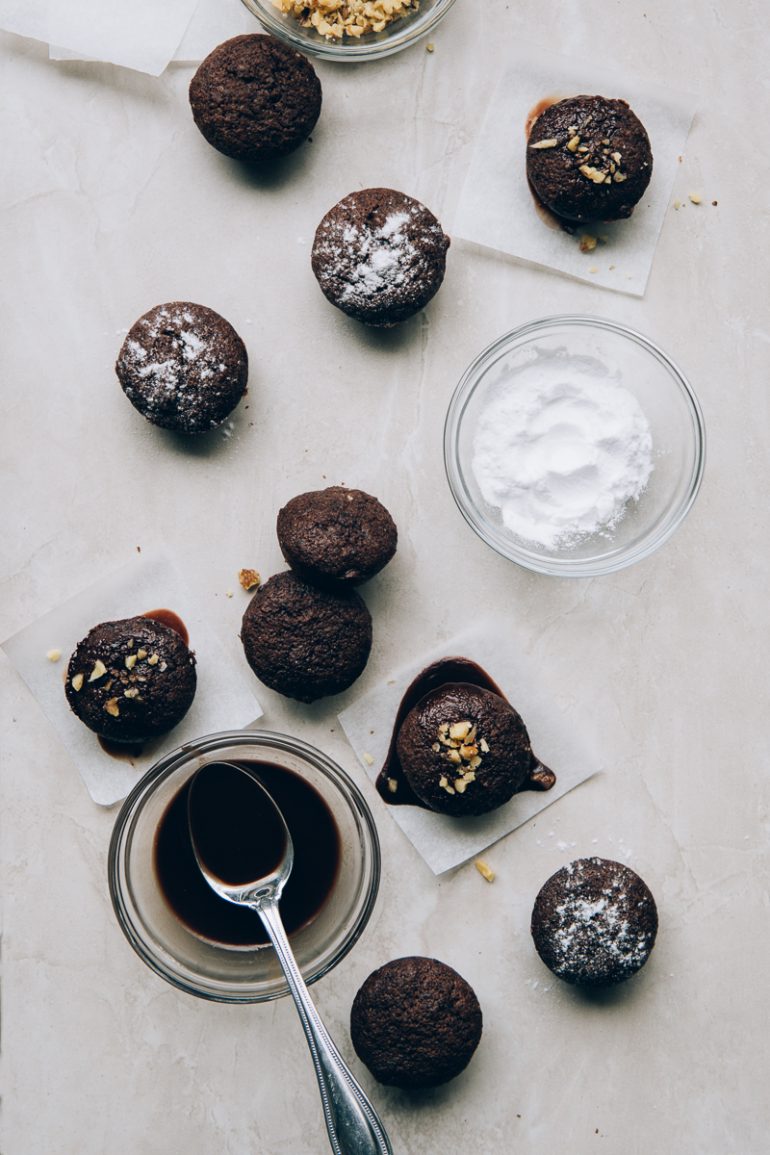 To make the keto brownie bites, you’re going to need a silicone mini-muffin pan. The ones I use have 24-wells and measure about 3/4-inch across the top, 1/2-inch across the bottom, and about 1/2-inch deep, for reference. Using silicone bakeware gives you a non-stick surface. Each little brownie pops right out without having to grease the pan or use liners.

To prepare the batter, melt butter and let it cool down a little bit, then whisk it together with the monkfruit sweetener, cocoa powder, eggs, vanilla extract, and salt. The batter will be runny and smooth after whisking. Now slowly incorporate the almond flour little by little until it is just combined. No need to overmix the flour in, the mixture will thicken right up as it is added.

Using a spoon, fill the wells of the mini-muffin pan; this recipe will fill 16 wells. The silicone pan is a little flimsy, so you’ll want to place it on a sturdy baking sheet to prevent the batter from spilling out during transfer to the oven. Pop it into your oven preheated to 350 degrees Fahrenheit and bake to your liking. On the low end, this will be around 14 minutes for fudgy keto brownies, but a cake-like texture will require more time (approximately 17 to 18 minutes total). Use the toothpick test to perfect your bake time! If the toothpick comes out wet, bake it longer. Crumbs on the toothpick are a good sign for the fudge-like brownie texture, and an entirely clean toothpick indicates more of a cakey brownie.

Let them cool off for a few minutes, then pop each one out onto a wire rack to completely cool. You can top them with a low carb chocolate ganache, a keto chocolate sauce (I used coconut oil and cocoa powder here in the photos), coconut flakes, hemp seeds, chopped nuts, or powdered erythritol sweetener (tastes just like powdered sugar!). The choice of toppings is entirely up to you and if it fits your macros. Enjoy! 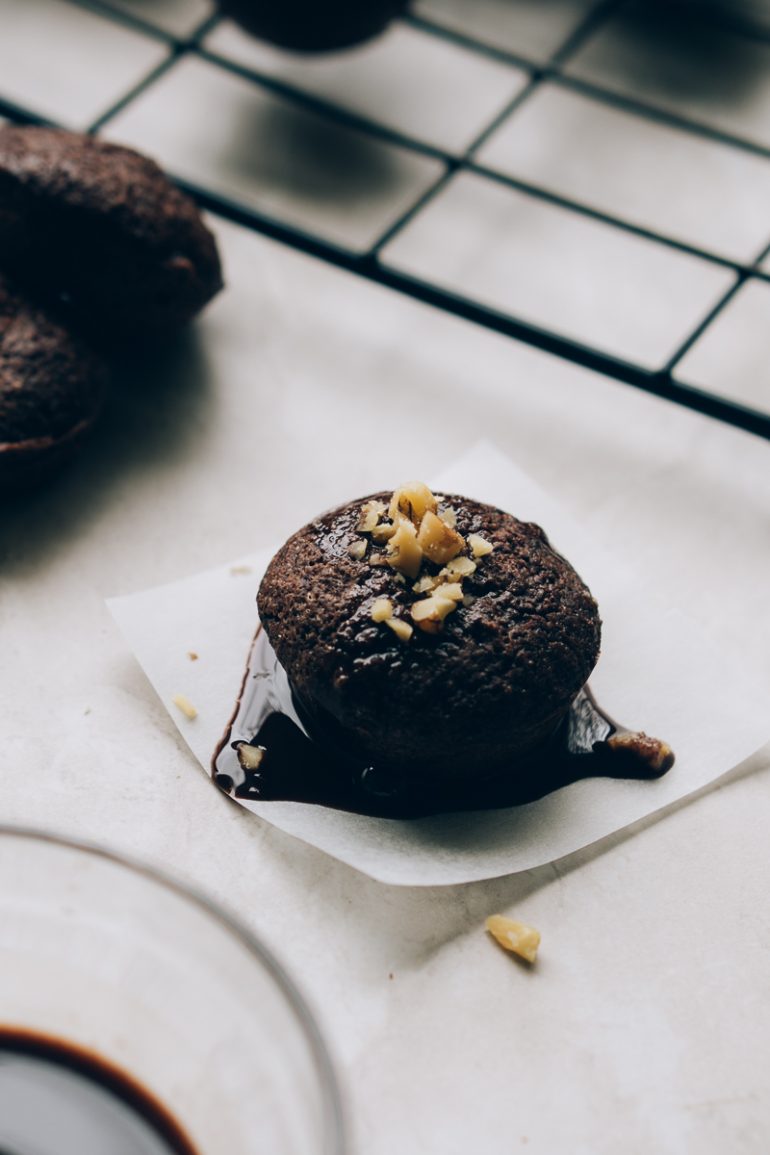 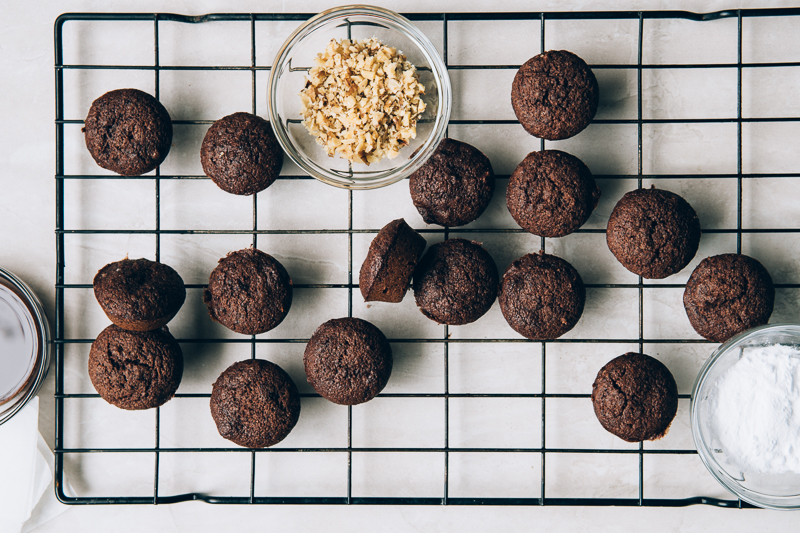 Nutrition info is for one keto brownie bite and without optional toppings; each brownie has 1g net carbs. I've left the actual "serving size", aka how many of the brownies you decide to eat, up to you. My hope is that this will make it easier for the people tracking their macros by giving the smallest unit of measure. 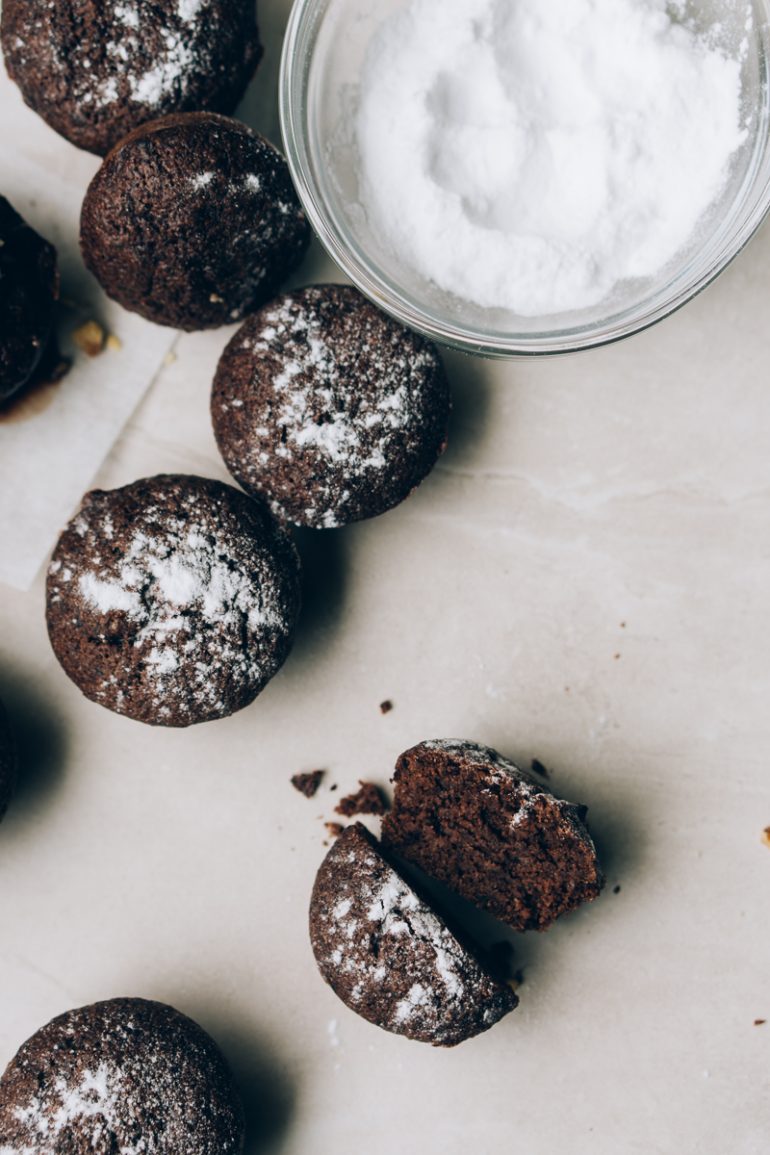